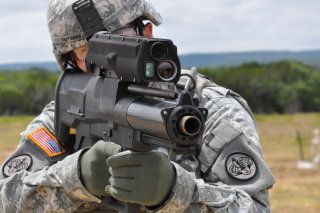 For some reason, the head-sheds of special operations thought frogmen would be doing a lot of fighting underwater. Both the Russians and NATO forces produced a pistol designed for underwater combat. Heck, Soldier of Fortune Magazine wrote an entire article on underwater knife fighting.

The HK P11 presented NATO forces with a spec-ops firearm that’s technically isn’t one; there’s no actual fire in this arm. It propelled 3.9 inch long, 30 caliber darts through the water. Bullets don’t work well underwater, but the P11’s darts cut through it rather well.

A pistol grip battery powered the electronically fired system. The P11 had five barrels, each capable of firing one round. Reloading required the P11 to be sent back to HK. Numerous European spec-ops forces adopted the pistol, but as far as I know, it was never used in frogmen ‘lack of fire’ fights.

Knight’s Armament makes some of the highest quality, most durable, most accurate, spec-ops firearms on the market. This little company provides our elite with the rifles, suppressors, and parts and pieces they need to succeed. Sometimes they also just make weird stuff, like the Revolver Rifle.

The Knight’s Armament Company, or KAC for short, built the Revolver Rifle in 1992 as a sniper rifle. This spec-ops firearm was designed to be utilized at relatively short ranges, inside of 100 yards. It needed to offer fast follow-up shots, a quiet action, and a powerful cartridge. On top of that, they didn’t want to leave behind any clues, like spent casings. A revolver turned into a rifle fit all of those requirements.

Suppressing a rifle is tricky and requires a gas seal between the cylinder and the barrel. KAC started with a Ruger Redhawk chambered in 44 Magnum and then went to town modifying it. They rechambered it to a proprietary 30 caliber telescoping cartridge, sealed the cylinder to barrel gap, then fitted it with a suppressor, bipod, stock, and a scope mount.

Knights created one Revolver Rifle, but no one fielded it. The prototype currently sits in the Institute of Military Technology.

Eugene Stoner, creator of the M16 rifle, didn’t stop designing rifles when it entered service. One of his other creations was the Stoner 63. Stoner designed the Stoner 63 to be a universal firearm. Militaries could use a common receiver and outfit a Stoner 63 into numerous configurations. That meant one platform could be a rifle, or carbine, or even an automatic rifle. Beyond that, the receiver could be converted to a belt-fed light, medium, or fixed machine gun.

Along the way, Stoner adapted the Stoner 63 to a Commando variant of the light machine gun and a compact survival rifle. The Stoner 63 was a revolutionary firearm system designed to be a one-stop-shop for military forces. The Army tested it, offered some suggestions, and Stoner and Cadillac Gage made the changes.

The U.S. Marine Corps took it to Vietnam in an experimental role, but found it to be finicky. The Stoner 63 excelled with the Navy SEALs, however, in the Commando configuration of a short-barreled light machine gun. This was the most successful spec-ops firearm on the list and saw continued use with the SEAL teams right up until the 1980s.

The rifle had to be so quiet that enemy forces couldn’t hear it beyond 100 yards. That required a massive integral suppressor that resembled a water jacket more than a can. The Army bolted it to a Winchester Model 70 rifle and outfitted it with a specialized scope and mount. The end result was a massive rifle that weighed 14.5 pounds and was 45 inches long. That’s about twice as much as a modern M4.

Spec-ops firearms tend to be small and compact, so this was an oddball. The head shed sent the rifle to Vietnam and the Sniper School tested it there. The rifle was exceptionally quiet, but grunts hate weight and it was heavy. It was never adopted, and the rifles were sent back to the states and scrapped.

The XM25 Counter Defilade Target Engagement System was borne from the failed XM29. As far as spec-ops firearms go, this one presented users with a unique solution to an age-old problem: How do you kill an enemy behind cover? Well, the XM25’s solution was to shoot a 25mm airburst grenade at him.

Programmable ammunition allowed the user to set a grenade to explode at an intended range. By setting the range, the operator could have the grenade pass by whatever the enemy was using as cover and then detonate, killing the bad guy from above or behind. With a range of 700 meters, it outclassed every other man-portable grenade launcher on the market.

In 2010 the XM25 CDTE went to Afghanistan with the 101st Airborne Division. This should be the future of infantry warfare, right? It performed well most of the time. It destroyed ambush sites, took out machine-gun nests, and shortened firefights to mere minutes.

Well, now, sadly, the XM25 CDTE was found to be rather heavy and occasionally unreliable. It was also expensive, and at one point, one misfired and wounded a soldier. After that, the Army took them out of service, and the project died in 2018. Of all the spec-ops firearms on this list, the XM25 CDTE was truly revolutionary and has a real future if the military ever decides to pursue the project.

The world of Spec-Ops firearms often presents us with a look at the future of small arms. Admittedly, sometimes that future deserves to be in a sci-fi pulp fiction novel and not on the practical battlefield. They often make up some of my favorite firearms, and these five top the list of the craziest spec-ops firearms of all time.

This article was first published by Sandboxx and is being republished due to reader interest.