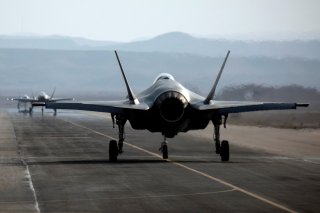 Here's What You Need To Remember: When considering the effectiveness of Israeli weapons, and the expertise of the men and women who wield them, it’s worth noting that for all the tactical and operational success the IDF has enjoyed, Israel remains in a strategically perilous position. The inability of Israel to develop long-term, stable, positive relationships with its immediate neighbors, regional powers, and the subject populations of the West Bank and the Gaza Strip means that Jerusalem continues to feel insecure, its dominance on land, air, and sea notwithstanding.

Here are five of the most deadly systems that the Israeli Defense Forces currently employ--the foundation of why Israel is a military power no one wants to mess with.

Robert Farley is a senior lecturer at the Patterson School of Diplomacy and International Commerce. His work includes military doctrine, national security, and maritime affairs.He blogs at Lawyers, Guns and Money and Information Dissemination and The Diplomat. Follow him on Twitter:@drfarls. This first appeared in May 2015 and is being reposted due to reader interest.