These are the Ten Hypersonic Missiles That America Is Building 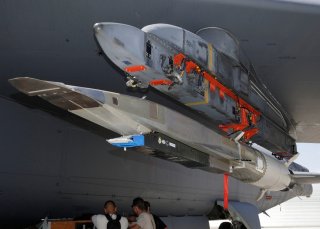 Here’s What You Need to Remember: America doesn’t expect to see its first fully operational Mach 5+ weapons enter service until next year (2023) at the earliest.

The United States of America may be lagging behind nations like Russia and China in fielding hypersonic missiles, but that’s not necessarily the same as being behind in the hypersonic arms race. While the idea of this modern arms race has been framed in the minds of many as a rush to develop and field hypersonic weapons, the truth is, hurrying to get them into service wouldn’t provide the U.S. with much in the way of real military capability.

Instead, America has taken a different approach to hypersonic missiles, opting to focus on fielding new and advanced capabilities rather than trying to beat the opposition to putting these weapons into service. In other words, the hypersonic arms race we’re living amid today is more like a race to the starting line of a more important competition, and the U.S. is much more focused on winning the next sprint than this one.

But there is still no denying that Russia and China’s hypersonic missiles have been in service for years, while America doesn’t expect to see its first fully operational Mach 5+ weapons enter service until next year (2023) at the earliest. So what exactly are these missiles America is developing, and what new capabilities can hypersonic weapons provide?

America Has Two Kinds of Hypersonic Missiles in Development

When people talk about hypersonic weapons, they’re usually referring to one of two kinds: hypersonic glide vehicles and hypersonic cruise missiles. Russia’s KH-47M2 Kinhhal, on the other hand, is technically nothing more than an air-launched ballistic missile, but all of America’s hypersonic efforts do fall within these two more advanced categories.

Hypersonic Glide Vehicles (HGVs) aren’t all that different than the warheads on traditional long-range ballistic missiles, at least in the early stages of their flight path. They are carried into the upper atmosphere via high-velocity boosters just like traditional ICBMs. The missile then deploys one or more glide vehicles that rely on momentum and control surfaces to manage their high-speed descent as they close with their targets.

Because hypersonic boost-glide missiles share a number of commonalities with long-range ballistic missiles, they are often carried aloft by the very same rocket platforms. Russia’s Avangard hypersonic boost-glide weapon, for instance, will be carried by their forthcoming nuclear ICBM already headed for service, the RS-28 Sarmat.

However, America has no hypersonic nuclear missiles in development, so the U.S.’ efforts can’t rely on using ICBMs for their own. Because there’s no way to determine the difference between a nuclear and a conventional payload on a launching ICBM, the assumption has to be that every ICBM is nuclear. As such, launching conventional hypersonic boost-glide vehicles from an ICBM simply isn’t a viable option, because it would prompt a nuclear response, and usher in the end of the world.

Hypersonic cruise missiles, on the other hand, often rely on an advanced propulsion system called a scramjet to fly at much lower altitudes. A scramjet, or supersonic combusting ramjet, is a variation on tried and true ramjet technology that allows combustion to take place with supersonic airflow. Because scramjets are really only efficient at high rates of speed, these missiles are often deployed from fast-moving aircraft or rely on a different form of propulsion to get them to these speeds. Scramjets often function best only at speeds above Mach 3.

It might be best to think of the hypersonic scramjet-powered cruise missiles America has in the works as extremely fast suicide drones, capable of maneuvering like an aircraft to some extent as they fly along a flatter flight path to their targets than a boost-glide vehicle can.

The Hypersonic Missiles Programs of the United States of America

To date, America has a number of publicly disclosed and acknowledged hypersonic missile programs in development, though some of them are arguably the same systems under development for multiple services or deployment methodologies. There are undoubtedly more programs than have been outlined here, of course, including the U.S. Army’s Vintage Racer program that was unintentionally revealed in 2020. Because Vintage Racer and others like it have little to no official documentation to work from regarding capabilities and timelines, we’ll leave those discussions for another day.

The Conventional Prompt Strike (CPS) weapon is a hypersonic glide vehicle carried aloft by ship-borne or submarine-launched ballistic missiles. Like all hypersonic missiles America has in development, the CPS will carry a conventional (non-nuclear) warhead and has been characterized as capable of traveling at speeds in excess of Mach 5.

The Long Range Hypersonic Weapon (LRHW) is a ground-based surface-to-surface missile meant to carry the hypersonic glide vehicle sourced through the U.S. Navy’s Conventional Prompt Strike weapon. This missile has a reported range of 1,725 miles and a top speed of over 3,800 miles per hour, or just about Mach 5. It is, for all intents and purposes, effectively the same weapon as the CPS, launched from ground-based launchers rather than ships or submarines.

The Air-Launched Rapid Response Weapon (ARRW) is an air-launched hypersonic missile carried first by a rocket motor before deploying a hypersonic glide vehicle with a conventional warhead. The ARRW is said to have a maximum speed of better than Mach 20 and a range of approximately 575 miles.

The Hypersonic Attack Cruise Missile (HACM) is the first we’ve discussed that does not leverage a boost-glide vehicle but instead flies at lower altitudes for shorter distances. Like traditional cruise missiles, the HACM flies along a fairly stable trajectory (like an aircraft), with the ability to maneuver to avoid being intercepted. The HACM leverages scramjet propulsion but is likely carried to an initial velocity via rocket motor after launch. There are no currently available figures on the HACM’s top speed or range, but it will likely be slower than most HGVs due to the nature of its operation.

Very little is currently known about the OASuW Inc. 2 weapon system yet, but it is expected to be a long-range, air-launched, anti-ship hypersonic cruise missile capable of being carried by the U.S. Navy’s carrier-based fighters, the F/A-18 Super Hornet and F-35C Joint Strike Fighter.

This effort is a continuation of the Offensive Anti-Surface Warfare (OASuW) Increment 1 program, which fielded the long-range but subsonic AGM-158C LRASM (Long Range Anti-Ship Missile). The weapon that will result from OASuW Inc. 2 is expected to utilize scramjet propulsion.

Operational Fires (OpFires) is a ground-launched medium-range hypersonic missile that leverages a HGV and conventional warhead. It and its launch systems are being designed by Lockheed Martin to be deployed from cargo aircraft like the C-130 Hercules to allow for broad expeditionary use across both the Army and Marine Corps. The weapon was designed to have a range that falls between 300 and 3,400 miles, and will likely be able to hit targets in excess of 1,000 miles away. Its top speed is expected to exceed Mach 5.

The SCIFiRE program is a joint effort between Australia and America to field solid-rocket boosted, air-breathing, hypersonic conventional cruise missiles to be carried and launched from carrier-based fighters as well as the P-8A Poseidon maritime surveillance aircraft.

There is very little information available about Project Mayhem, currently under development at the Air Force Research Laboratory. It is expected to be a hypersonic cruise missile that will be among the first to leverage a variable cycle engine capable of managing subsonic, supersonic, and hypersonic flight without the need for a traditional ramjet or rocket booster to bring it to high Mach speeds before the scramjet comes online.

The Screaming Arrow effort is similar and likely will leverage the same basic systems as the Air Force’s Project Mayhem. Like the OASuW Inc 2 weapon concept, the Screaming Arrow aims to be an air-breathing hypersonic cruise missile that leverages scramjet propulsion, but unlike most other hypersonic missile efforts under development for the United States of America, the Navy intends to field a variable cycle engine within this missile system, allowing it to fly under its own propulsion and offering a wider variety of flight characteristics.