These Deadly Grenade Launchers Are the Ultimate Navy SEAL Weapons 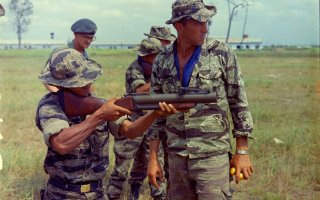 Here's What You Need to Know: Don't mess with these weapons.

Since their formation in the 1960s, the Navy’s SEALs have been on a quest for more firepower. The elite commandos have been especially interested in bigger grenade launchers.

The sailing branch formed the Sea, Air and Land Teams in 1962. These “unconventional warfare” units—what we call Special Operations Forces today—quickly became known for their vast arsenals of experimental weapons.

By the end of the decade, naval commandos had tested new lightweight machine guns, automatic shotguns and silenced weapons. The specialized teams were also interested in grenade launchers.

The U.S. Army had led the way with a crude but effective weapon called the M-79. The launcher fired a 40-millimeter projectile farther than an infantryman could toss a hand grenade.

But the M-79 could only fire one shot before it had to be reloaded. The SEALs wanted a weapon that used the explosive ammunition and could fire multiple rounds in a row.

In the late 1950s, the Army had tried to incorporate a three-round sliding magazine into the existing design. The ground combat branch’s Special Forces tested some of these launchers, called the T-148, in Vietnam.

SEAL Team One also got its hands on one of these prototypes, according to an article by noted SEAL historian Kevin Dockery. The unit assumed the open-ended magazine would quickly fill up with debris and jam—and never used it in combat.

Disappointed by the Army’s offering, the commandos turned to their own service for new concepts. The sailing branch created the Special Operations Branch at the Naval Weapons Center in China Lake, California specifically to address these requirements.

China Lake created two different multi-shot grenade launcher designs during the 1960s. One weapon was designed to be attached to a standard M-16 rifle, while the other resembled a large shotgun.

The rifle-mounted launcher had three separate barrels, each loaded with a grenade. The system was complicated and fragile and could not stand up to the rigors of combat, according to Dockery.

The shotgun design—seen in this picture taken by the author—was simpler and more promising. The launcher had many features in common with the M-79 and could hold four rounds in its magazine.

Despite its apparent success, the Navy made less than 30 of these weapons. The commandos could easily have found the launcher too heavy and bulky for everyday use.

Only four of these weapons are known to exist today, according to Wikipedia. One of them is stored in the Naval History and Heritage Command collection at the Washington Navy Yard.

The Pentagon also cut budgets and scaled back Special Operations Forces after the war in Vietnam ended. Still, the SEALs remained interested in bigger grenade launchers.

In the 1990s, the Naval Ordnance Station in Louisville, Kentucky created a new pump-action design called the EX-41. Most notably, the new launcher fired a special type of 40-millimeter ammunition.

The new grenades combined features from the low-speed rounds used in small launchers like the M-79 and faster flying rounds designed for bigger weapons like the Mk-19 grenade machine gun.

This unique launcher was a beast weighing some 21 pounds, according to a Navy briefing. By comparison, the single-shot M-79 weighs less than seven pounds.

In 1995 the sailing branch sent the sole prototype to Knights Armament Corporation for further development. KAC could not save the design and the program quietly came to a halt.

The latest chapter in the SEALs’ search began in the mid-2000s. In 2006, the Marine Corps began buying six-shot grenade launchers based on a decades-old South African design.

The Marine’s M-32 is basically a 40-millimeter revolver. Special Operations Command—and the SEALs—quickly took interest in the weapon.

In 2008, reports began to surface that American commandos were looking at their own version of the launcher, called the Mk-14. The new variant—with its U.S. Navy designation—had a shorter barrel to make it lighter and easier to handle.

By the next year, SOCOM reportedly had more than 200 of the weapons, and by 2011 the launchers had made it to Afghanistan. The new version was so successful that the Marines adopted it themselves, calling it the M-32A1—one of which is visible in the picture above.

After four decades, the SEALs finally have their big grenade launcher.