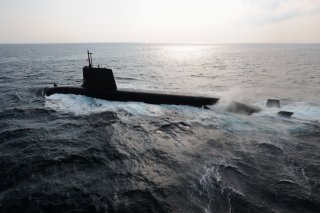 Here’s What You Need to Remember: One of the most crucial improvements in submarines of the postwar era is the air-independent propulsion (AIP) system. First fielded in the 1990s, the development of AIP changed the ways non-nuclear submarines operated, allowing them to fight—and hide—underwater longer. Combined with their extreme quietness, the use of AIP has made modern diesel-electric subs efficient killers, capable of stalking and sinking their prey even in a challenging anti-submarine warfare environment.

Conventional, non-nuclear propulsion submarines previously spent a great deal of time on the surface. Equipped with diesel-electric engines, these submarines needed surface air to run the engines and recharge their batteries. This had the unfortunate effect of limiting the amount of time a submarine could spend submerged and meant diesel-electric subs would typically leave port sailing on the surface and then submerge once in the patrol area. A reliance on surface air also limited the amount of time a sub could stay underwater during combat.

AIP, while not granting a diesel-electric submarine the same underwater staying power as a nuclear-powered submarine, is still a radical improvement. There are several types of AIP propulsion systems. The Sterling system is one of the oldest, closed-circuit diesel generators, followed by chemical fuel cells. The latest trend in AIP systems is the use of powerful, long-lasting lithium-ion batteries.

Chinese submarine technology has grown by leaps and bounds over the last three decades, moving quickly from aging Romeo-class diesel-electric submarines to more modern designs. One of China’s latest submarine classes is the Type 039A or Yuan-class submarine. The submarine is roughly similar to the Soviet/Russian Kilo-class, with a bullet-shaped hull and large sail, but at 3,600 tons the Yuans are twenty percent larger. The submarines have a top speed of twenty knots submerged and are the first Chinese submarines to use AIP, reportedly the Sterling system. The class is equipped with six 533-millimeter standard diameter torpedo tubes capable of launching torpedoes, Klub anti-ship missiles, C-802 anti-ship missiles or sea mines.

Another highly advanced submarine class from Japan, the Soryu class is a large, 4,600 ton diesel-electric submarine with AIP propulsion. The Soryu-class utilizes the original Swedish Kockums AIP system to stay quietly underwater. The latest submarine in class, however, Oryu, was launched in early October 2018 at Kobe, Japan. Oryu is the first submarine equipped with a large bank of lithium-ion fuel cells, the same types that power laptop computers and electric cars, to act as a powerful, long-lasting reservoir of energy for long endurance underwater. Like the Type 212 class the Soryu submarines have x-shaped stern planes. Each submarine has six 533-millimeter torpedo tubes for launching Type 89 heavyweight guided torpedoes, sub-Harpoon anti-ship missiles and mines.

The grandfather of AIP submarines, the Swedish Gotland-class were the first submarines equipped as a class with the advanced propulsion system. At just 1,600 tons submerged, the three Gotland-class boats are smaller than many diesel-electric submarines, but Sweden has little use for large submarines in the restricted confines of the Gulf of Bothina and Baltic Sea. The Gotlands can do twenty knots submerged and five knots operating off AIP. The subs have four 533-millimeter torpedo tubes and unique among subs can ferry up to forty-eight mines externally mounted to the hull to quickly sow minefields.

The Russian Lada-class does not currently feature an AIP propulsion system, but Russia’s status as a major submarine power and work on such as system means Moscow can’t be left off the list. Meant as a replacement for the Cold War-era Kilo-class, the Lada subs make up the low end of Russia’s high-low submarine mix. The submarines faced technical and funding issues that delayed introduction: the first submarine was laid down the day after Christmas in 1997 and only entered service in 2010. The submarines displace 2,700 tons submerged and are armed with six 533-millimeter torpedo tubes for launching torpedoes, Klub anti-ship missiles, Kalibr land-attack cruise missiles and mines. One of the technical problems that plagued the Ladas was the failure to develop a domestic AIP system, but work continues, and Moscow hopes to build such a system into later submarines. At least five Ladas are planned and possibly more if Russia cannot afford higher-end submarines such as the Borei-class.