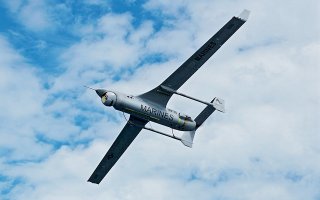 Here's What You Need to Know: Drones can help Navy destroyers or Coast Guard NSCs provide blanket ISR coverage of the western Pacific.

The world’s oceans and seas are vast. Maritime challenges to U.S. interests and international legal and humanitarian responsibilities are increasing in both quantity and quality. But the number of Navy and Coast Guard ships available is relatively small, and given current budget realities, not likely to grow sufficiently to meet increasing demand. In addition, the Defense Department is considering restructuring Navy forces, including among other things, reducing the number of large-deck aircraft carriers on which the Fleet relies for much of its at-sea surveillance capabilities.

If the Navy and Coast Guard are going to continue using aircraft carriers for a broad range of missions, then it will be vital to enhance their airborne intelligence, surveillance, and reconnaissance (ISR) capabilities. Equipping surface ships with small unmanned aerial systems (UASs), such as Insitu’s ScanEagle and Blackjack, expands their surveillance horizons, lethality, and overall effectiveness at a low cost. Moreover, small UASs are easy to launch and recover.

For several decades, the Sea Services have sought to use UASs to supplement their fleets of manned platforms. UASs, or drones, are particularly useful for conducting routine missions that require a long time on station, such as maritime ISR. While quite capable, platforms such as the MQ-4C Triton, the new MQ-25 Stingray, and the proposed SeaGuardian variant of the MQ-9 Predator B, are big undertakings requiring a lot of personnel. This limits their deployments to airfields or ships with large decks such as aircraft carriers. In addition, these systems are expensive to operate, albeit less costly than most manned platforms.

One challenge to deploying UASs on surface ships has been the lack of space for them. Even ships designed with a flight deck and hangar, such as the Navy’s Arleigh Burke destroyers and Littoral Combat Ships and the Coast Guard’s National Security Cutters (NSCs), have limited space for which UASs must compete with manned helicopters.

Today, both the Navy and Coast Guard are deploying a set of small ship-based UASs to supplement manned assets, performing many of the same roles that they do to support military and law enforcement missions. Two UASs that provide all the advantages of operating drones from surface ships while reducing their impact on other activities are the ScanEagle and the Blackjack. With their unique launch and recovery systems, these UASs permit expanded at-sea operations with minimal impact on ship efficiency.

Designed to be low-cost, easily repairable, rapidly modified, and with moderate manning requirements, the ScanEagle has proven a remarkable success since the first version was deployed to support the U.S. military almost twenty years ago. With its stabilized turret housing an advanced electro-optical or infrared sensor, ScanEagles conducted hundreds of thousands of hours of airborne surveillance in support of U.S. Marines in Iraq, transmitting high-resolution day/night images. While it operates at low altitude, the ScanEagle is so small and its engines so quiet that it is virtually undetectable to human observers. The ScanEagle family has logged more than 1.3 million operational hours supporting the U.S. military and numerous friends and allies.

The current version of this UAS, the ScanEagle 3, has a new design, better engines, improved power generation, and a greater carrying capacity–nineteen pounds–than its predecessors. As a result, it can launch with multiple payloads simultaneously while staying in the air for up to 18 hours. Depending on the mission and desired range at which the platform will operate, the ScanEagle 3 can carry a sensor package consisting of an electro-optical/infrared camera, a laser pointer, a communication relay, an Automatic Identification System interrogator, and Vidar (visual detection and ranging, a surface search capability).

ScanEagle uses a unique launch and recovery system. It is launched via a pneumatic launcher and is recovered using a hook on the end of the wingtip to catch a rope hanging from a thirty-to-fifty-foot pole. This system is particularly well-suited to operations from unimproved land locations or surface ships with limited open spaces. It also requires a small launch and recovery crew.

The ScanEagle is currently aboard all nine of the Coast Guard’s new Legend-class NSC. ScanEagle more than doubles the range at which an NSC can conduct ISR relying solely on its onboard sensors, from thirty-five miles to as much as seventy-five miles. This represents a total area search volume four times greater than would possible in the absence of ScanEagle.

Coast Guard Commandant Karl Shultz has effusively praised the ScanEagle: “ScanEagle is truly a game changer for our crews and I’m proud to report that this technology is coming to every National Security Cutter in our fleet. But, and there’s always a but, not quickly enough. I’d like to accelerate the fielding of this technology, doubling the delivery schedule of this key enabler from two to four systems per year. At that rate, by the end of my tenure as commandant, we will field full ScanEagle capability across our entire National Security Cutter fleet.”

Insitu’s newest entry in the small UAS market is the RQ-21A Blackjack. Derived from the ScanEagle, and originally called the Integrator, the Blackjack won the competition to be the U.S. Navy and Marine Corps’ next-generation Small Tactical UAS. Larger than the ScanEagle, it is capable of flying farther, faster, and at higher altitudes. It has an operating range similar to that of the ScanEagle. The Blackjack has a payload of about fifty pounds, allowing it to carry a multi-intelligence sensor package that currently consists of electro-optical zoom and mid-wave infrared cameras, plus an infrared marker and a laser rangefinder. The Blackjack can remain airborne for up to twenty-four hours. Launch and recovery methods for the Blackjack are the same as that used for the ScanEagle and employ the same equipment.

New communications technologies could radically expand the search envelope of the Blackjack by no longer requiring the UAS to operate within its pilot’s line of sight. By employing a lightweight satellite communications system, the Blackjack’s operational range could be increased to more than three hundred miles from its launch location while remaining on station for about fourteen hours. This would increase the area a Blackjack-equipped ship could search by nearly an order of magnitude. With an extended-range Blackjack, a handful of Navy destroyers or Coast Guard NSCs could provide blanket ISR coverage of the western Pacific.