These Five Rifles Just Might Be the Best Military Weapons Ever 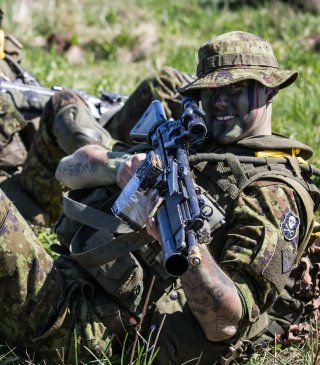 While tanks, planes and artillery may have a larger effect on the battlefield, the infantryman’s individual rifle is still a critical part of any military. Here are five “families” of weapons that may be considered to be the best in the world, and why.

Eugene Stoner’s original design for a rifle remains one of the most common and fielded designs around the world. Both in their original caliber of 7.62x51mm NATO and in the smaller 5.56x45mm, variations of the M16, SR-25, and AR-10 are a common sight in armories around the world.

While the M16 had a rocky start in Vietnam, nowadays more and more countries are moving to the rifle. New Zealand recently adopted the MARS carbine, a simple update of the design. The United States continues to field refined versions of the design with improvements such as free floated barrels, improved triggers, and softer-shooting gas systems. The L129 sharpshooter rifle, another variant on the design, is a popular weapon with British troops.

The “100” series of AKs was created when IZHMASH applied the improvements of the AK-74M to other variants of the AK in different calibers and barrel lengths. Thus, the current service rifle of the Russian Federation, the AK-74M can be considered a “100” series AK.

From Venezuela to Syria to India, the AK-103 has proven a choice update to all users of the venerable AK-47 and AKM. New barrels provide greater accuracy and the “74”-style muzzle brake tames the recoil and decreases muzzle flash relative to the older AKs. While the new AK-15 and AK-203 may be more ergonomic and feature rails, the AK-103 is likely to continue to sell as countries upgrade their stocks of rifles.

The shorter AK-104 and AK-105 have proven popular with specialized elite Russian police and military teams.

Originally designed for U.S. Special Operations Forces, the FN SCAR rifle has proven popular with regular NATO troops as well. Belgium and Portugal have adopted the SCAR as a standard service rifle, and Lithuania issues the “heavy” 7.62x51mm version to their marksmen as a precision rifle. The “heavy” version is notable for being rather light compared to older rifles in the caliber.

The G3 series of roller-delayed blowback firearms continue to soldier on in the twenty-first century. Despite the advent of newer designs like the FN SCAR, the G3 remains in use by many NATO nations, notably in the Baltics and in Germany, while receiving continued modernization. The primary use is as a precision “marksman” rifle, a role in which most G3s are well suited for, due to their free floated barrel.

However, the stock design of the basic G3 poses problems for modern usage. The original G3 stock was designed to put the shooter’s eyes precisely in line with the iron sights. The use of modern optics requires a cheek riser if the shooter wants to get a proper “cheek weld” on the rifle. It also is too long to be comfortably used with body armor.

Sweden’s Ak4D variant of the G3 addresses both of these issues with a telescoping, higher stock made by Spuhr AB. The iron sights on Ak4Ds are completely removed, as they are practically unusable with the newer stock. By most accounts, the Ak4D has been well received.

Switzerland is known for having very high accuracy standards for the individual soldier and their rifle, and the SG 550 series is no exception. An interesting mix between more western-styled rifles and the Russian AK, the SG550 features the long-stroke gas piston operation, two-lugged rotating bolt, and charging handle design of the AK, while also having western-style pop-open receiver design, thumb safeties, adjustable gas, and diopter drum sights.

The result is a rifle that’s highly reliable and highly accurate. But the rifle is rather heavy. Compared to the M16 and SCAR, the SG550 weighs in at 4.5 kg to the M16A2’s 4 kg. The “rock and lock” magazines also don’t drop free, slowing reloads compared to AR-style rifles like the SCAR, M16, and HK416.

Carbine versions of the SG550, the SG552 and SG553 remain popular with special troops worldwide.