These Five Weapons Protect France on Land, Sea, and in the Air 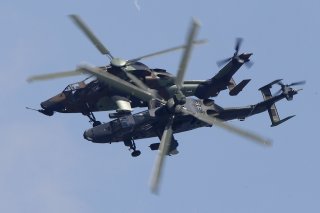 Here's What You Need To Remember: France’s four nuclear ballistic missile submarines: Triomphant, Téméraire, Vigilant and Terrible maintain France’s ability to keep at least one submarine on station all times, capable of inflicting terrible retaliatory damage on any nuclear aggressor.

France also has nuclear weapons, a legacy of French President Charles DeGaulle’s desire for a country that was militarily self-reliant. France was the fourth country to attain nuclear weapons capability, and during the Cold War maintained its own triad of land, air, and sea-based nukes.

France’s main battle tank, the LeClerc, was designed toward the end of the Cold War to replace the AMX30 series of tanks. At fifty-seven tons, the LeClerc is one of the smallest tanks currently in production. A lightweight and a 1,500hp engine — the same rating as the heavier M1A2 Abrams — combines to give the latest version of the LeClerc a speedy twenty-six to one horsepower to weight ratio.

Like the Abrams, the LeClerc has a 120mm main gun and carries forty rounds of ammunition. Unlike the Abrams, LeClerc uses an indigenous GIAT design fed by an autoloader. This reduces the crew by one, resulting in a smaller tank. The autoloader is reportedly capable of up to twelve rounds a minute. The commander and gunner have separate long-distance and thermal sights for observation and aiming.

The general layout of the Tiger is similar to that of other attack helicopters, with a two-person crew stationed in tandem. The Tiger is armored to withstand up to 23mm rounds, giving it protection against the most common anti-aircraft gun caliber. Two Rolls-Royce MTR390 engines propel the Tiger to speeds of up to 196 miles per hour.

The only non-American nuclear-powered aircraft carrier in existence, Charles de Gaulle is also France’s lone aircraft carrier. Originally planned to be a two-carrier force, the second ship of the class was cancelled due to cost.

France’s second-generation “boomers,” the Triomphant-class is smaller than American and Russian equivalents, with a total tonnage of just 8,000 tons submerged. The use of nuclear power gives the Triomphants unlimited range and the ability to remain submerged for prolonged periods of time.

Kyle Mizokami is a defense and national security writer based in San Francisco who has appeared in The Diplomat, Foreign Policy, War is Boringand The Daily Beast. In 2009 he cofounded the defense and security blog Japan Security Watch. You can follow him on Twitter:@KyleMizokami. This article first appeared several years ago.