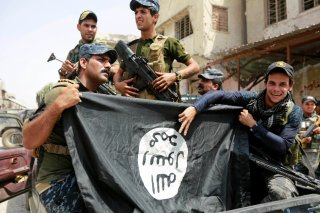 Here's What You Need to Remember: The current rump of ISIS, while still considered relevant and worthy of the correct measure of attention and vigilance, has been successfully reduced in large measure due to the successful military campaign to destroy ISIS.

ISIS once threatened all of Iraq and Syria while also raising the concerning and serious prospect of terrorism against America. But what about now? Is ISIS gone?

We don’t hear about the remnants of ISIS much anymore. Today, those parts of ISIS that may still exist are obscured by the vocal and persistent concerns about great power rivals such as Russia and China.

“Though ISIS is, by orders of magnitude, not the organization with the capability they once were, they are still a threat, and we are still on the ground in Iraq assisting and advising our Iraqi partners at their invitation to be there,” Pentagon spokesman John Kirby told reporters at a Pentagon briefing April 6, according to a transcript of the event.

Perhaps there are pockets of enemy fighters or fringe factions within the previously organized group of otherwise disparate groups of terrorists, thugs or desperate young men which made up the bulk of ISIS. The success in eliminating, or at least decapitating and massively impairing ISIS’ ability to stage any kind of significant offensive operation, may largely reside in the U.S. coalition’s campaign to disrupt and destroy the command and control epicenter driving ISIS from within. As might also be the case with Al-Qadea, once its leadership or its main demagogic personality is removed, an organization such as ISIS may simply have no operational formal structure or apparatus.

It would make sense, given the importance of crippling or taking out command and control, that perhaps the U.S. coalition had success with cyberattacks or other kinds of disruptive attack methods aimed at ISIS communications networks and command and control apparatus. Operations simply cannot be staged or coordinated, even with the possibility of willing participants, if there is no apparatus, medium or network through which to communicate. Perhaps this kind of operational success can succeed in localizing, containing or at least massively curtailing any kind of operational reach a group such as ISIS might have had at one point. The current rump of ISIS, while still considered relevant and worthy of the correct measure of attention and vigilance, has been successfully reduced in large measure due to the successful military campaign to destroy ISIS. The campaign plan, which included a multi-national air-attack component aligned with long-range ground based missile fire, included the first combat use of the F-22 stealth fighter. This multinational ISIS attack effort was largely planned and led by current Defense Secretary Lloyd Austin when he served as a uniformed commander.

“We share the Iraqi goal of having a security force that’s capable of defending Iraq’s own sovereignty and denying terrorist groups the use of Iraq as a base for operations. The coalition continues to support partner forces in Iraq and in Syria with advising air support, provision of intelligence, surveillance and reconnaissance, and conditions-based equipment divestment,” Kirby said.