Think You Can Outrun a 1000-mile Range Cannon? Not So Fast. 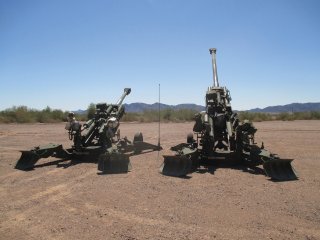 Key point: The Army also is working with the Navy to develop a common hypersonic glide vehicle, which would launch atop a rocket then travel 1,400 miles or farther at a top speed exceeding Mach 5.

While larger in scale than any existing artillery piece, the Strategic Long-Range Cannon doesn’t actually require much in the way of new technology, Col. John Rafferty, who in 2018 led the Army’s long-range-fires modernization effort, toldBreaking Defense.

The Strategic Long-Range Cannon is one of several new weapons the Army wants to help it match, and eventually exceed, the range and destructive power of North Korean, Russian, and Chinese fires. The U.S. Army during the 2000s lagged behind its major rivals in artillery development.

The current, standard Guided Multiple Launch Rocket System rocket flies as far as 43 miles. A new extended-range version of the GMLRS, which the Army hopes to field starting in 2020, fly more than twice as far.

The current, large-diameter Army Tactical Missile System, which also is compatible with HIMARS and MLRS, has a maximum range of 186 miles. The new, lighter Precision Strike Missile—due to enter service in 2023 -- boasts a 310-mile max range.

In range, the Strategic Long-Range Cannon fits between the Precision Strike Missile and the hypersonic missile. With the new gun, the Army could strike targets such as staging bases, logistical networks, and air bases—targets that, before, were the sole responsibility of Air Force and Navy planes and missiles.

The German-built two of the Heavy Gustafs and deployed them on the Eastern Front for the sieges of Sevastopol, Leningrad and Stalingrad. The guns fired 48 shells in combat, demolishing some Soviet fortifications. It took thousands of men to deploy a Heavy Gustaf and 500 men just to fire it.

In 1945 the Germans spiked both guns, destroying them to prevent them from falling into Allied hands.

David Axe served as a defense editor for the National Interest. He is the author of the graphic novels  War Fix, War Is Boring and Machete Squad. This article was first published in 2020.