Thousands of Americans Surrendered At This Battle. Forty Percent Never Made It Home. 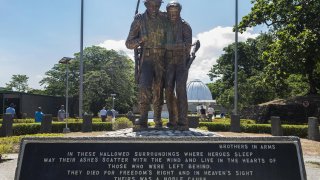 Here's What You Need To Remember: The fall of Corregidor was the result of everything going wrong.

Image: U.S. military and Philippine government officials attend a ceremony to mark the 75th anniversary of the fall of Corregidor to the Japanese during World War II on Corregidor, Cavite, May 6, 2017. U.S. Air Force Senior Airman Corey Pettis.