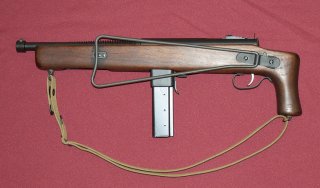 In recent years the Corps has introduced a bevy of advanced new weapons and accessories, from the M27 Infantry Automatic Rifle to the new LPVO Variable Combat Optical Gunsight. However, Uncle Sam’s favorite gun club wasn’t always first in line for new firearms and equipment. In fact, for the longest time, the Marine Corps was treated like the red-headed stepchild of the military, and this truly shows in World War 2.

While General Issue Joe stormed Normandy with an M1 Garand, the Marines in the pacific were armed with all manner of unique weapons that could meet their needs, if not as well as the standard-issue gear Soldiers received in World War II’s other theater.

Why did these unique weapons enter service at all?

In what seems to be a common theme in the wars of the first half of the 20th Century, the U.S. military just wasn’t ready for World War II when it arrived. Rifles like the M1 Garand couldn’t be produced fast enough to arm troops. This lead to the Marine Corps being armed with weapons from World War 1, as well as small batches of unique weapons that were adopted in small numbers to fill the gaps.

According to some historians, the Pacific Theather and the Marines fighting in it were a bit of an afterthought at the time, with the lion’s share of attention being paid to the fight against Nazi Germany in Europe. While that’s not a universally accepted argument, the Marine Corps’ common use of unique weapon systems produced in low numbers during the conflict seems to be evidence in its favor.

Eventually, all of these varied weapons were replaced, and the Marine Corps carried M1 Garands and Thompsons like everyone else. Early in the war, though, well, things were a bit trickier.

Melvin Johnson was an interesting fellow with lots of roles. He was a lawyer, a Marine Corps Officer, and a firearms designer. It seems appropriate that the M1941 Johnson Rifle became one of the unique weapons of choice for his beloved Corps. Marines wanted a fast-firing rifle that could outpace the M1903 bolt action, but M1 Garands were tough to come by at the time.

The M1941 Johnson Rifle offered a semi-automatic weapon that utilized a short recoil system in which the barrel and bolt move rearward together. It’s an odd but effective setup. It was so effective, in fact, that while the M1941 Johnson Rifle may have been a stand-in for the M1 Garand, some actually considered it to be the better rifle all around.

The M1941 Johnson rifle served with Raiders, ParaMarines, and in the hands of Medal of Honor recipient Robert Hugo Dunlap for his actions on Iwo Jima. The M1941 Johnson Rifle served its country well but never became a mainstream service rifle. As far as these unique weapons go, the Johnson made a big impression.

With Thompson’s being tough to obtain and the Grease Gun not yet been invented, the Marines needed a submachine gun in the Pacific. The M50 and M55 Reising filled that role. The M50 had a traditional layout with a fixed wooden stock, while the M55 had a folding metal stock and pistol grip. Paramarines preferred the folding stock and lightweight design of the M55. On paper, it seems to have been equal to–or even better than–the famed Tommy gun. These unique weapons were stopgaps but often offered a variety of advantages over the general issue equipment they substituted.

The Reising was lighter than the Tommy gun by almost four pounds, and used a closed bolt design with a delayed blowback. This was a time where open bolts ruled for submachine guns, and an closed bolt gun meant reduced recoil, higher accuracy, and in theory, a more reliable design.

Issues with Resiing arose almost instantly, however. The guns had many delicate parts that were easily broken in combat. This includes the complicated delayed blowback design, a fragile firing pin, and fragile magazine feed lips. Repairing the gun was difficult since many parts were hand-fitted and not interchangeable. These unique weapons didn’t last long in service and were pulled in 1943.

Paramarines and Marine Raiders were no stranger to unique weapons, and the Johnson Light Machine Gun might have been one of the best at the time. It allowed users to adjust the gas system as they desired from 200 to 600 rounds a minute.

Shooters could choose from semi-automatic and automatic configurations—closed bolt functions for semi-auto fire and open bolt for automatic fire.

The side-loading magazines are awkward but effective. The single stack magazine necessitated it due to its long overall length. If it was placed under the gun, it would be quite long–long enough to make it hard to assume a good prone position. Additionally, the side loading was easier on the magazine, and side-mounted magazines helped reduce weight and length. Although, this predictably makes the weapon a bit more unbalanced.

While these unique weapons were used heavily during the early stages of World War 2, the military loves standardization (and often for good reason). Eventually, the Marine Corps fell in line with the standard Army forces and the equipment they carried, but many carried their appreciation or affinity for these unusual service weapons long after the fighting came to an end.

This article first appeared in Sandboxx.