Time for a Nuclear-Armed Australia? 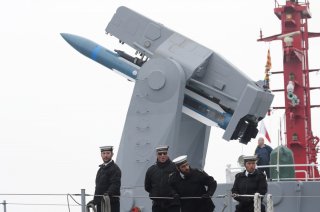 Here's What You Need To Remember: Nuclear weapons cast long political shadows—which, indeed, is their primary purpose. But they’re also weapons of mass destruction, meaning a decision to proliferate should never be taken lightly.

ASPI released recently the second issue of its Strategist Selections series, pulling together a collection of 36 of my Strategist posts on nuclear strategy. I’m honoured to follow in the footsteps of Kim Beazley, whose collected posts formed the first issue, and hope that readers find value in the latest publication. The Strategist, ASPI’s commentary and analysis site, is now over seven years old, and a vast archive of more than 6,000 articles is there for the mining. I do not think the latest volume in the series could be more timely.

In recent months the question of whether Australia should build its own nuclear arsenal has received considerable attention. It’s a question that demands careful handling, not least because it’s an invitation to the incautious respondent to take a length of rope and hang themselves in the corner. And all too often, respondents do exactly that, burdening the argument for a domestic nuclear arsenal with poor judgement, strategic paranoia and moral insensibilities.

For many years the simple, formal answer to the question has always been the same: Australia is a party to the Nuclear Non-Proliferation Treaty, and it is not a repentant state. (Repentant states are those that signed the treaty but later came to regret their own hastiness.) That’s because the NPT generally represents the last major occasion on which states were asked to choose their nuclear identity.

The strategic commentariat has, over the years, been reluctant to challenge the choice Canberra made then. For good reason: Australia hasn’t confronted a serious strategic challenge since Richard Nixon’s opening to China, an event almost contemporaneous with the NPT. That’s why Hugh White’s recent book is novel. It explores the option of an indigenous arsenal essentially in 21st-century strategic terms.

So, should Australia build its own nuclear arsenal? I think the answer is, ‘Yes, if it needs to.’ That’s a big ‘if’—indeed, a series of big ‘ifs’: if the regional strategic environment becomes appreciably darker; if US extended nuclear deterrence is no longer available, or patently incredible; and, perhaps just as importantly, if there’s bipartisan Australian acceptance of the need for an indigenous arsenal.

The first ‘if’ poses a major challenge of assessment: how dark does the regional strategic environment need to be? The fact that the Australian mainstream is already broken over the ‘China threat’, despite China’s recent blatantly coercive behaviour, doesn’t bode well for its ability to reach a consensus on what might constitute the grounds for initiating a nuclear-weapons program.

I’d venture one, imperfect, benchmark: the environment would need to be sufficiently dark that an Australian nuclear-weapons program would be seen (by some countries at least) as a positive contribution to regional stability. It certainly would have to be dark enough for us to satisfy the ‘supreme national interests’ test of Article X of the NPT—the article covering withdrawal from the treaty.

The second ‘if’—extended deterrence—is already encountering some choppy waters, waters which Donald Trump’s presidency has roiled rather than calmed. True, the administration’s 2018 nuclear posture review comes closer to underlining the specific provision of a US nuclear umbrella to Australia than any of its predecessors. On page 22 of the main text, there’s a sentence that reads: ‘The United States has extended nuclear deterrence commitments that assure European, Asian, and Pacific allies.’ That’s an interesting separation of America’s usually hyphenated Asian and Pacific allies, and may reflect a deliberate attempt by Washington to reinforce its assurance to Australia.

Still, US extended nuclear deterrence was a doctrine invented for a different era; it faces genuine credibility issues in a more risk-tolerant world, especially if themes of nationalism and buck-passing continue to resonate in US strategic policy.

The third ‘if’ is just as awkward, and often overlooked. Australia, to use a rowing metaphor, hasn’t got its head in the boat in relation to an indigenous nuclear-weapons program. For Australian thinking about nuclear weapons to change, we’d probably have to be facing an existential threat. Only such a condition could generate the level of bipartisan agreement necessary to develop, build and deploy a serious nuclear force.

But, of course, if we were staring down the barrel of an existential threat, we’d probably want to have a nuclear arsenal to hand relatively quickly. And there’s the problem. Nuclear-weapons programs take time. In wintertime, many Canberrans are acutely conscious of how far their most remote hot-water tap is from their hot-water system, and the amount of time it takes for hot water to move through the house. But pursuing an indigenous nuclear-weapons program in Australia’s current circumstances would be worse: it would be the equivalent of turning on a tap in a house to which no hot-water system had ever been fitted.

It would be easier to build nuclear weapons if we had in place a stronger core of nuclear skills in our workforce, some capacity to produce fissionable materials, and a suitable delivery vehicle. (More ‘ifs’.) Australia has few of those assets. We have one research reactor at Lucas Heights. We have neither an enrichment capability for uranium nor a reprocessing facility for plutonium. And our best delivery vehicle, the F-111, has long since faded into history. If Australia was to attempt to proliferate, using only national resources, we’d likely face a 15-year-plus haul.

Working in partnership with others would allow us to shorten that timeframe. Indeed, in a post-NPT world we might even be able to buy an arsenal, or critical parts thereof, off the shelf—our usual path to acquiring high-technology military weaponry. But that seems an unlikely scenario.

Personally, I think there are enough large strategic variables already at play that we should be thinking now about an indigenous nuclear-weapons program in much the same way that we did between the 1950s and 1970s.

That is, we should be acting to minimise the lead time required for us to have such a capability, just in case we decide we do need it.

This article first appeared in The Strategist, a publication of the Australian Strategic Policy Institute, in 2019.