In the Time Before Tanks, Battle Trains Were an Armored Menace 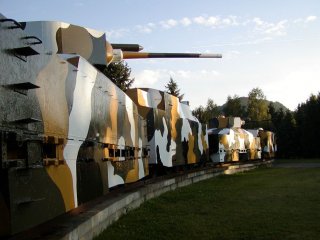 Armored trains, equipped with heavy weaponry and enough protection to withstand a brutal fight, may not be commonplace today, but for more than a century, these track-eating juggernauts saw action in conflicts ranging from the Civil War to the Cold War and beyond.

Long before tanks would revolutionize mechanized warfare, the concept of a heavily armored, heavily armed, mobile war machine had already captured the imaginations of war fighters keen to secure an edge over their opponents. Railways, which served as the economic life blood of many developing cities, were crucial for defensive forces. Trains were essential for transporting goods for commerce, of course, but they were also the fastest and most reliable means of transporting troops, equipment, and supplies in support of any war effort.

As a result, the concept of armored trains filled two essential roles in 19th century conflicts: First as a means of defending railways from attack, and second as a way to deliver large amounts of firepower to distant battlefields in a relatively short amount of time. As the years pressed on, new vehicles would come to dominate the battlefield, leaving armored battle trains behind in favor of vehicles that weren’t beholden to vulnerable train tracks; but in one form or another, armored trains even remain in service for a few nations even today.

Engraving captioned “The railroad battery on the Philadelphia and Baltimore Railroad, built to protect the workmen while rebuilding the burnt bridges on that road–From a Sketch by William C. Russell, of Wilmington Del. (WikiMedia Commons)

After Confederate soldiers attacked the railroad and placed snipers nearby to prevent Union efforts to repair the tracks. Baldwin Locomotive Works were tasked with creating a solution to this problem, which came in the form of a modified baggage wagon carrying some serious firepower.

In April of 1861, Baldwin’s battle train emerged, boasting a massive 24-pound howitzer and fifty ports for riflemen to engage targets outside. The sides of the train were armored with two and a half inch oak planks covered in metal plating to withstand volleys of enemy fire, and the portion that surrounded the howitzer opened with large hinges to allow the crew to raise and aim the heavy gun.

While Baldwin’s wagon served its original purpose well, it and other similar armored trains would eventually prove too vulnerable to enemy artillery fire, falling slightly out of favor in the waining years of the war. Baldwin’s successful wagon would eventually be disassembled by a Confederate raiding party in 1864.

Armored trains in World War I

The Brits soon followed America’s lead, with Charles Gervaise Boxall first proposing the use of armored trains for coastal defense in 1884. Within a decade, he’d be assigned to commanding the 1st Sussex AV, tasked with the construction of trains suitable for the job. By the onset of World War I, Russia too had begun fielding both light and heavy armored trains, along with Austria-Hungary shortly thereafter.

Some of these massive war machines carried firepower that was more common on the high seas than in the thick of ground fighting. As far back as 1899, one British train carried what was known as an Ordnance RML 7-pounder, or simply “7-pounder mountain gun,” that was manned by sailors on loan from the HMS Tarter. A young Winston Churchill himself, serving as a war correspondent in the Second Boer War, found himself aboard such a train that came under enemy attack.

“Nothing looks more formidable and impressive than an armoured train; but nothing is in fact more vulnerable and helpless. It was only necessary to blow up a bridge of culvert to leave the monster stranded, far from home and help, at the mercy of the enemy.”

Despite being partially de-railed, Churchill’s train managed to escape the fray, and despite the concept’s inherent vulnerability, armored trains would remain a facet of war fighting for decades to come.

Polish armored trains convinced the Nazis to build their own

During the German invasion of Poland in World War II, Polish armored trains were among the more effective defensive platforms of the conflict. Although Poland employed only a few armored trains at the time, reports from the era show that their use of these trains for both offensive and defensive operations proved the concept was still viable some 60 years after its inception. Polish successes with these mighty battle trains even prompted Germany to create some of their own.

Germany didn’t rely heavily on their own armored trains, but introduced a number of modern elements into their designs. Nazi battle trains included armored locomotives and rail cars with armor plating around anti-aircraft guns, howitzers, and turrets.

While the Soviets would lose a number of armored trains throughout World War II, once again demonstrating the inherent vulnerabilities of heavy equipment that’s beholden to tracks, it was the Russians who would later bring the armored train concept into the 21st century.

Four years after the Second World War came to a close, the Soviet Union successfully tested their own atomic bomb, throwing the world’s two nuclear powers headlong into a military and technological staring contest that would last for decades. In the race to field more powerful and more capable nuclear weapons, along with the required platforms to deliver them on target, the Soviet Union found themselves with a problem. Their nuclear ICBMs (Intercontinental Ballistic Missiles) were positively massive — larger than those employed by their American competition — due in part to the Soviet’s lagging technology capabilities in the nuclear domain.

Due to propulsion and guidance technology that had not been miniaturized in parallel to the U.S. competition, the Soviets were forced to adopt some creative concepts for moving their large missile systems around, like the massive Typhoon-class submarine and world’s most powerful helicopter, the Mil V-12. Among these creative solutions were, you guessed it, armored and heavily armed battle trains.

Protective portions of these specially equipped trains boasted 5–20mm-thick armor, and in many ways, each armored train served as a self contained military unit, complete with as many as 10 main battle tanks, two light amphibious tanks, several anti-aircraft guns and special cars for carrying troops and railroad repair equipment. These trains were eventually phased out, but some were said to remain in service until as late as 2005.

Armored trains in the 21st century

Because armored trained are extremely vulnerable to air strike or railways sabotage, most modern militaries have ceased their use — but that doesn’t mean the era of armored trains has ended.

However, armored trains that bare a more striking resemblance to the heavily armed trains of yester-year have been seen in use by pro-Russian separatists fighting in contested regions of Ukraine as well. Because these separatists are widely believed to be receiving direct support, equipment, and even troops from Moscow, these trains could arguably be considered Russian — though the debate about that will undoubtedly continue to rage on Twitter for some time to come.