The Tomcat Flew Its Last U.S. Mission, but the Fighter Still Has Sharp Claws 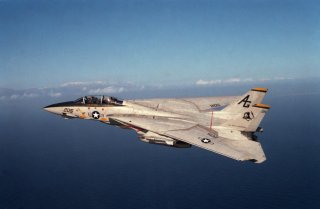 Here’s What You Need to Remember: With its variable-sweep wing, the F-14 Tomcat could match the speeds of other aircraft as needed—and for takeoff and low-speed flight, the wings would shift to the front, while for supersonic speeds the wings could tuck backward. Because of its versatility, it served as an air superiority fighter, fleet defense interceptor and even tactical reconnaissance platform.

During its three decades in service with the United States Navy the Grumman F-14 Tomcat more than lived up to the role, it was designed for, drawing blood in combat and even getting its moment in the spotlight in the film Top Gun. Designed to incorporate the air combat experience learned during the Vietnam War, the F-14 Tomcat was the first of the American "Teen Series" fighters that included the F-15 Eagle, F-16 Fighting Falcon and the F/A-18 Hornet.

With its variable-sweep wing, the F-14 Tomcat could match the speeds of other aircraft as needed—and for takeoff and low-speed flight, the wings would shift to the front, while for supersonic speeds the wings could tuck backward. Because of its versatility, it served as an air superiority fighter, fleet defense interceptor and even tactical reconnaissance platform.

The Tomcat drew its first blood in August 1981 during the "Gulf of Sidra incident," in which two F-14s were attacked by a pair of Libyan Su-22 Fitters. Both Fitters were shot down, but the events would be replayed nearly eight years later when in January 1989 another pair of F-14 Tomcats shot down two Libyan MiG-23 "Floggers" again over the Gulf of Sidra.

The U.S. Navy continued to rely on the F-14 Tomcat throughout the 1990s and early 2000s, where it was utilized in strike escort and reconnaissance roles in Operation Desert Storm as well in Operation Deliberate Force and Operation Allied Force in the conflicts in the former Yugoslavia. The F-14 Tomcat's final combat mission took place in February 2006 when two Tomcats were used in a bombing mission in Iraq.