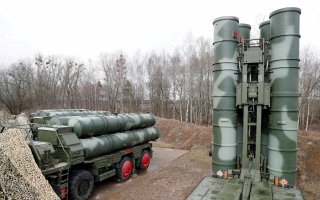 Turkey reportedly conducted an expected live-fire test on Friday of its Russian S-400 surface-to-air missile system. The test represents a troubling milestone in the steady deterioration of Ankara’s relationship with Washington and NATO – potentially increasing the chances that Washington will impose sanctions on Turkey under the Countering America’s Adversaries Through Sanctions Act.

Turkey’s acquisition and activation of the S-400 are troublesome for a number of reasons. First, they constitute a tangible manifestation of Turkey’s drift toward Russia – one of the more significant geo-strategic developments in recent years. This drift is particularly problematic given Moscow’s activities in Europe and the Middle East that threaten core U.S. and NATO interests. Turkey’s drift is also troubling due to the country’s status as a NATO member as well as its strategic location.

Turkey’s employment of the S-400 is also concerning given the system’s ability to practice identifying, tracking, and targeting the F-35. Ankara’s assurances that such information would not find its way to Moscow are not persuasive. The co-location of the S-400 and F-35 would likely enable Moscow to gain valuable intelligence helpful for shooting down F-35s flown by Americans and their allies. For this reason, Washington was right to evict Ankara from the F-35 program last year.

Additionally, the United States and NATO have been transitioning from the “Mode 4” aircraft-identification system to a next-generation encrypted “Mode 5” system. This system allows NATO air defense batteries and aircraft to discern whether an unknown aircraft is a friend or foe. The United States will not allow the S-400 to have Mode 5 capabilities, as doing so would allow Russia to break NATO identification codes and quickly identify aircraft.

However, excluding Turkey’s S-400s from NATO air defense systems would leave Turkey potentially shooting blind in a conflict, when life-and-death decisions are made in seconds. Accordingly, in such a scenario, Turkey would struggle to differentiate NATO from adversary aircraft – potentially resulting in fratricide.

This reality would make Turkey a less capable NATO ally and increase the risk for U.S. and allied pilots operating in or near Turkish airspace.

This could have a direct impact on whether the United States will want to maintain some military forces and systems at the U.S. air base in Incirlik. Regardless, if tensions continue to escalate, Ankara may evict U.S. forces from the base or impose severe restrictions on U.S. operations emanating from the base.

In light of this possibility, one hopes that the Pentagon has updated and detailed plans for the potential relocation of U.S. forces from Incirlik. Greece may provide a potential alternative.

In the meantime, in addition to any potential imposition of sanctions, congressional leaders may want to request a classified briefing from the Pentagon on the implications of this latest S-400 development for U.S. and allied military operations and basing.

After all, an ally should not acquire a cutting-edge air defense system from the leading threat to the alliance. With Erdogan once again brushing aside American concerns, failing to respond assertively could leave Ankara and others with the impression that they can ignore Washington with few consequences.

Bradley Bowman is senior director of the Center on Military and Political Power (CMPP) at the Foundation for Defense of Democracies (FDD), where Major Shane Praiswater is a visiting military analyst. They both contribute to FDD’s Turkey Program. Views expressed or implied in this commentary are solely those of the authors and do not necessarily represent the views of the U.S. Air Force, the Defense Department, or any other government agency. For more analysis from Bradley, Shane, CMPP, and the Turkey Program, please subscribe HERE. Follow Bradley on Twitter @Brad_L_Bowman. Follow FDD on Twitter @FDD and @FDD_CMPP. FDD is a Washington, DC-based, nonpartisan research institute focusing on national security and foreign policy.

This article was first published by the Foundation for Defense of Democracies.