Trade: Why Canada's Economic Policy (And US Relations) Has Been Flawed 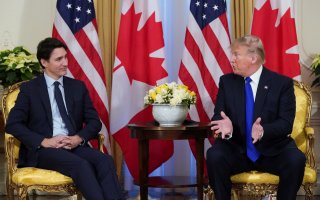 Existential crises that threaten one’s entire society have a way of forcing us to see the world as it truly is. The coronavirus pandemic is no exception. Canada, once mocked by South Park as “not even a real country anyway,” has come together in remarkable fashion. Canadians and their leaders, from every region and across the political spectrum, are all pushing in the same direction.

But while the pandemic has showcased the country’s inspiring cohesiveness, it has also revealed the tragic costs, measured in lives lost and economic opportunity squandered, of Canada’s continued adherence to a one-dimensional ideology that long ago passed its best-before date.

Since the 1990s, Canadian economic development policy has been anchored in two words: free trade. The previously widely accepted notion that countries should have an industrial policy — a strategy for encouraging strong and desirable economic growth — was cast aside in the single-minded pursuit of comprehensive trade agreements.

Economic security and prosperity, so the conventional wisdom held, was best ensured by lowering trade barriers and encouraging specialization. Production would be global, which wouldn’t pose any problems in a free-trade world.

There have long been two flaws in this policy. First, while Canada may be “a trading nation,” trade is merely a means to an end: securing markets for Canadian producers and ensuring Canadians’ access to foreign goods and services. At the end of the day, it’s production, not trade, that matters most for a country’s economic security and power.

Second, policy-makers failed to appreciate the extent to which the entire free-trade world was dependent on the actions and support of the United States given its global superpower status. After the Second World War, the U.S. decided to underwrite a liberal multilateral order that encouraged free trade, which it was able to reinforce in the 1990s after the end of the Cold War.

For a long while in the 1990s, Canada was able to get away with neglecting industrial policy and to imagine that free trade would be our economic salvation. This was because the world of open borders, ostensibly supported by U.S. power, hid the long-term costs of de-industrialization since we still had easy access to cheap production in other countries.

Unfortunately for Canada, that world hasn’t existed for almost 20 years. The multilateral free-trade world was only ever as resilient as the American commitment to it.

The unilateral U.S. choice of security over prosperity following the 9/11 terrorist attacks was the beginning of the end of this multilateral economic order. The unsanctioned American invasion of Iraq hastened the system’s decline, as did its open embrace of torture in contravention of international conventions and basic human decency.

All this happened before the pandemic exposed the physical vulnerability of countries lacking guaranteed access to producers of medical equipment. The current international scramble for medical equipment is not causing the world order to collapse: it’s a symptom of an order that has been falling apart in slow motion for a long while.

Countries have been tentatively, almost unconsciously, adjusting to this reality. These include forms of what I call digital economic nationalism, in which countries, including Canada, are pursuing national industrial policies in high-tech areas like artificial intelligence and are seriously considering the regulation of global, mostly American, online platforms.

Still, tentatively is the operative word. Policy continues to be marked by a failure to think through the consequences of these long-term trends, and by the hope that U.S. President Donald Trump’s eventual departure from the Oval Office will restore the multilateral order.

It won’t, for the simple reason that there is no longer a political bipartisan consensus on Capitol Hill that this order is worth saving. The liberal, multilateral world order that has been underwritten by the United States since the end of the Second World War cannot survive this degree of instability for very long.

Canada’s free-trade obsession has put us in a bind, making us overly reliant on global supply chains. That’s a huge unforced error given that 19 years ago, 9/11 showed us just how quickly border policy can change.

The recently concluded NAFTA 2.0, officially known as the U.S.-Mexico-Canada trade agreement (USMCA), has myriad loopholes that leave Canada open to future harassment and concessions on data localization made without any analysis on their impact. It also illustrates Canada hasn’t fully comprehended how the world has transformed since 1994.

Policy-makers could well find that the USMCA, purpose-built for a world that no longer exists, severely restricts their ability to set a production-focused policy appropriate for 2020 and beyond.

Still, acknowledging reality is the first step in dealing with a crisis. The post-Second World War order is gone. Trade policy must be put in its proper place, a component — but not the entire game — of a comprehensive, government-led domestic industrial policy that involves actual, production-focused planning for a world in which the conventional wisdom of the past 70 years no longer holds.

Just signing trade agreements is no longer enough to ensure Canadian prosperity. We have to deal with the world as it is, not as we wish it would be.