The Triomphant-Class Submarine: This French Submarine Could Kill Millions 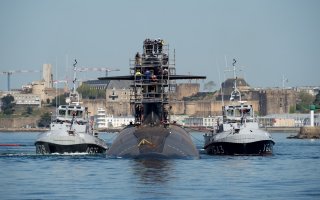 Here's What You Need to Know: This is a well-made and silent fleet of boats.

France’s Triomphant-class is the French Navy’s Force de dissuasion, or strategic deterrent. Though France did have a nuclear triad of land, sea, and air-based nuclear weapons for most of the Cold War, the land-based component of the French nuclear triad was eliminated in the late 1990s after the fall of the Soviet Union.

The Triomphant-class is berthed at the secretive Île Longue near Brest in France’s west. Île Longue has been France’s sea-based nuclear deterrent base since 1965 and is reportedly one of the most heavily-defended places in France.

At least one Triomphant-class submarine is on patrol at any one time, while the other three hulls are either undergoing maintenance or working up for a deployment. Their mission is simple: leave port undetected, remain quietly at sea, and be prepared to carry out a nuclear strike at any time by order of the President of France.

In order to carry out this mission, the Triomphant-class is equipped with 16 missile silos arranged into two 8-missile groups aft of the sail. These silos house France’s ballistic missiles, either the M45 or its replacement, the M51.

The M45 is a three-stage rocket with a 6,000 kilometer, or about 3,700 mile range. The M51 is a similar ballistic missile with greater range and accuracy, and a significantly more powerful warhead. Its capabilities are similar to the Trident II ballistic missile in use with the American and British Navies, and it is currently replacing the M45.

The class thankfully has never fired in anger, though it was involved in some unintentional action in 2009. The first of the Triomphant-class, Le Triomphant, collided with a British Navy sub, the HMS Vanguard while patrolling in the middle of the Atlantic. The Vanguard is part of the United Kingdom’s four-hull Vanguard class, ensuring the U.K.’s sea-based nuclear deterrence just like the Triomphant-class.

Neither submarine was aware of the other’s presence, and the accident was totally coincidental. Commentators highlighted the difficulty of two submarines colliding with each other—and how good their acoustic-reduction technology must be. Though small, the Triomphant-class is silent, and deadly.