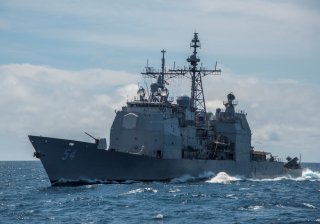 The US government has just declassified one of its most sensitive national security documents—its 2018 strategic framework for the Indo-Pacific, which was formally classified SECRET and not for release to foreign nationals.

The full text, minus a few small redactions, was made public late on 12 January (US east coast time), having originally been cleared for publication on 5 January, prior to the turmoil in Washington.

The release of this document will be rightly overshadowed in the news cycle by the aftermath of the disgraceful domestic attack on the US Capitol, but for observers interested in the future security of the world beyond American shores, it will be of long-term interest and warrant close reading.

Long before historians can debate the Trump administration’s legacy in this vital region, this highly unusual step of fast-forward declassification—the text was not due for public release until 2043—brings an authoritative clarity to the public record.

The slightly reassuring news is that beneath President Donald Trump’s unpredictability, conceit and unilateralism, the policy professionals were striving to advance a more serious and coherent agenda.

There was a plan after all, however incomplete and insufficiently resourced its implementation.

The framework and its covering cabinet memorandum are dated February 2018, a time when the contours of strategic rivalry in the Indo-Pacific were rapidly taking shape.

Although the text would have involved negotiation among agencies, these are technically White House/National Security Council (NSC) documents. Lead authorship can be attributed to the then national security advisor, H.R. McMaster, and, in particular, to the then NSC director for Asia and later deputy national security advisor, Matt Pottinger, who was among officials to abruptly resign last week after the mob assault on the US legislature.

In a covering note explaining his advice to declassify the framework, outgoing National Security Advisor Robert O’Brien emphasises that the strategy has been all about seeking to ensure that ‘our allies and partners … can preserve and protect their sovereignty’.

This confirms that US strategic policy in the Indo-Pacific was in substantial part informed and driven by allies and partners, especially Japan, Australia and India.

Indeed, one of the strategy’s plainest successes was fulfilling the objective ‘to create a quadrilateral security framework with India, Japan, Australia, and the United States as the principal hubs’.

The American framework bears the fingerprints not only of Washington’s December 2017 National security strategy but Tokyo’s 2016 ‘free and open Indo-Pacific’ policy and Canberra’s 2017 initiatives, notably the Turnbull government’s foreign policy white paper and its early action against Chinese interference and espionage.

O’Brien properly notes this emerging convergence, and the common ground among the Indo-Pacific policies of the US, Australia, India, Japan, ASEAN, some key European partners and, increasingly, South Korea, New Zealand and Taiwan. This emerging consensus gives the lie to the Chinese claim that the Indo-Pacific is some American or Australian invention that will ‘dissipate like ocean foam’.

Without saying so, the declassified strategy appears to acknowledge that an effective American regional policy is as much about following as leading. This means steady support for allies and partners, rather than the pursuit of some shaky all-round US primacy.

It also turns out that American officials’ public line about respecting international law, regional multilateralism (such as ASEAN-centric diplomatic institutions) and the sovereign equality of states was not just rhetoric: it was what they were telling themselves as well.

Geopolitical observers worldwide, from diplomats to intelligence analysts, politicians to businesspeople, journalists to scholars, will find much else to unpack and interpret. There’s plenty to report and debate in almost every line of the 10-page document.

Contrary to concerns that the Trump administration was veering to a one-dimensional, military-led external policy, there was a clear recognition of the need for holistic engagement to bolster allies and counter China, across the full spectrum from information operations to advanced technology research and infrastructure investment.

Whether America has the capacity, coordination and will to follow through on such a total strategy is another question. The strength of the plan is also its weakness. It was an effort to exhaustively map out analytical assumptions, preferred end-states, objectives and actions, leaving it open to the criticism that it is excessively ambitious yet leaves things out.

The document is light, for instance, on anticipating the challenge of Chinese influence in the South Pacific, an indication that Canberra’s activism there is an Australian initiative, not a play to please America.

A critical reading reveals some glaring gaps between intent and reality. For example, we see an aspiration to improve relations between Japan and South Korea to put pressure on North Korea, but no sense of how this would be done.

Sometimes the bar was set so high that failure was almost assured. There are aspects where America’s privately stated ambitions—for sustained ‘primacy’, for North Korean nuclear disarmament, for international consensus against China’s harmful economic practices—were at odds with the art of the possible.

In hindsight, this bold vision for US foreign policy failed to take account of the depth of domestic division and dysfunction hampering America’s ability to advance its interests abroad.

At the same time, although it did not anticipate so staggering a shock as Covid-19, the framework’s warnings of China’s affronting assertiveness and the expansive authoritarianism of the Chinese Communist Party under Xi Jinping have proven prescient. They’ve been borne out by events, from the geopolitics of the pandemic and wolf warrior ‘diplomacy’ to the crushing of Hong Kong, intimidation of Taiwan, violent clashes with India and coercion against Australia.

Of course, the decision to release this historic document now will raise speculation as to the motive for it.

At one level, it’s a refreshing and rather radical act of transparency, aimed partly at reassuring allies and partners that, whatever its travails, America plans to double down on the Indo-Pacific.

There was likely much internal debate ahead of the decision to go public, but it was probably judged that any risk to America’s interests from showing its hand, such as the frank admission of an imperative to strengthen India as a counterbalance to China, would be outweighed by the benefits and the example of openness.

Whatever else can be said, this reduces the excuse for miscalculation, and makes more glaring by contrast the gap between what Beijing says and what it does.

That said, this is not a strategy for full-blown containment extending right across the economic realm, and it does not seem to anticipate the pace or extent of decoupling since pursued both by Beijing and Washington.

The language is often defensive: not to sunder the US–China economic relationship, but rather to ‘prevent China’s industrial policies and unfair trading practices from distorting global markets and harming US competitiveness’. There’s still acknowledgement of the need to ‘cooperate with China when beneficial to US interests’, although this is so vague that it will make sense for President-elect Joe Biden’s administration to find some early specifics for cautious experiments in partnership.

Sceptical observers may well say that publishing the strategy now, amid a troubled transition, is an obvious play for policy continuity. This is in light of concerns that a Biden administration may not yet be committed to challenging China’s bid for dominance—or indeed to the idea of the Indo-Pacific, at least in its ‘free and open’ variant, as a rallying cry for regional solidarity against coercive Chinese power.

But it’s surely no bad thing to salvage the few achievements of an otherwise grim era in American foreign policy, while laying down some markers for the incoming administration.

Indeed, if the intent all along was to amplify American effectiveness by respecting and uniting allies, then a rounded 2020s evolution of the 2018 Indo-Pacific strategy will stand a significantly better chance of success under Biden than it would have under a second Trump term.

And the document articulates the fundamentals of what in Congress has become a bipartisan position on contesting China’s geopolitical powerplays, supporting allies and partners, and protecting American interests across domains ranging from military and technology to geoeconomics and information and influence.

The declassified framework will have enduring value as the beginning of a whole-of-government blueprint for handling strategic rivalry with China. If the US is serious about that long-term contest, it will not be able to choose between getting its house in order domestically and projecting power in the Indo-Pacific. It will need to do both at once.

As I have argued in my book explaining the Indo-Pacific concept, America cannot effectively compete with China if it allows Beijing hegemony over this vast region, the economic and strategic centre of gravity in a connected world.