Trump-Fuelled Chaos Shows Democracy is in Trouble: Here's How to Turn the Tides 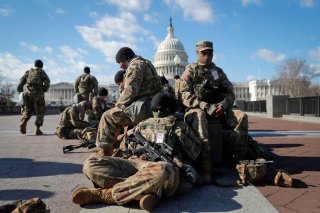 Joe Biden will become the 46th president of the United States on Jan. 20, seven days after outgoing U.S. President Donald Trump became the first commander-in-chief in history to be impeached twice — this time for inciting an insurrection — after his supporters raided the U.S. Capitol.

The oft-repeated notion that the U.S. is a beacon of democracy owing in part to its tradition of peacefully transferring power is no longer a believable proposition.

The common refrain from several U.S. politicians in the days following the U.S. Capitol insurrection on Jan. 6 that “this is not us,” “we’re better than this” and “we are the greatest democracy in history” cannot mask the reality that the U.S. is far from the democracy Americans think it is.

With thousands of National Guard troops stationed on Capitol Hill and at state legislatures across the country to protect against further attacks by armed and organized thugs in advance of the inauguration, many of the most salient features of democracy have been profoundly diminished.

There are many ways to define democracy, but the normative formulation — a constitution, fair elections, an impartial judicial system and a range of presumably fair and open administrative structures and processes — is under attack in contemporary America.

Society is inundated with a daily dose of indices from the stock market and opinion polling, but the chaos in the U.S. over the past several years shows us we need better measurements of the health and vibrancy of democracy.

We advocate for a more critically engaged democracy, one that includes more robust civil society participation, a focus on social justice, social inequalities and power relations and the need to develop and support transformative practices, solidarity and education. While discussing, developing and achieving a richer democracy requires negotiating a minefield of partisanship and bitter divisions, simply feigning that we’re living in democracies is no longer a viable option.

Our framework advocates re-examining democracy through meaningful dialogue, deliberation, engagement and action. A focus on real-world problems and realities should be a welcome change from the more mainstream focus on the horse race of attaining and maintaining power.

There are a number of questions underpinning this reimagining of democracy. For instance:

• What do we know about the arms trade, how much is being sold, to whom, how these arms are used, who are the victims, etc.?

• How do we understand homelessness in terms of the human, economic and political costs?

• How do we document and deal with the reality of women routinely being violated, beaten and killed by men in our society?

• What is the impact of racism on people and society?

• How are we dealing with environmental issues and their impact on the planet?

These are some of the questions all citizens of democracies must ask to move beyond elections as the defining characteristic of democracy.

It’s necessary to question the fundamental components of democracy in order to accurately, transparently and critically assess how democratic our societies really are. In the U.S., in particular, moving beyond baseless assertions that “we are the greatest democracy on Earth” is important, especially for everyone left out of the equation.

There are a slew of democracy indicators and measures in a variety of areas, including social justice and racism, sexism, poverty, citizen engagement, citizen participation in elections, education, health care, international relations with other states and peoples, the environment, governance and press freedom.

For each indicator, we propose a central question: What is being done and what should be done to ensure governments around the world are working to enhance democracy in each specific area of measurement?

Applying this question to every available indicator will encourage debate and action that move beyond the predilections of the governing party and select interests.

A simple way to do this would be for every democracy indicator to outline where governments stand on each one. What are they doing to combat systemic racism, for example? How are they encouraging citizen engagement in elections, to name another example? The detailed work supporting these indicators would also be made public, allowing for greater citizen participation in understanding, critiquing and addressing key concerns.

There are several issues that could obfuscate and undermine this project.

A richer democracy will result from documenting and exposing issues and problems and engaging with the population, especially if the process includes meaningful dialogue, accountability and planning. Formally outlining what’s democratic or undemocratic about our society — government policies, programs, laws, practices and traditions, etc. — should compel decision-makers to be more attentive to systemic problems.

The objective is to bring together those working to accurately measure democracy to purposefully reimagine democratic engagement and action. It may be difficult, but the status quo is no longer an option. As citizens, we must push for broad critical discussion and engagement on the foundations of democracy around the world.

Democracy indicators are only a starting point. Our suggestion for a framework to reform democracy is not meant to be a comprehensive, finite policy instrument. But moving beyond soundbites about how the stock market is responding to political upheaval, or how politicians are performing in polls, could bring welcome relief to those adversely affected by the troubling state of democracy right now.

The need to go further

This is not to suggest that democracy indicators currently serve little purpose. In fact, most are accurately informing us how and where democracy is in danger.

But it’s our contention they must go further so that democracy is debated, deliberated, interrogated and reconsidered well outside of the electoral system, which is flawed and limited in many ways.

The United States will illustrate this week that changing a nation’s leader without profoundly rethinking the system he or she is upholding is no longer acceptable for the citizens of any country. Collectively, we need to advocate for a more engaged and meaningful form of democracy that will benefit all citizens.