Trump Screams Fraud on Twitter - But Not in Court. Why? 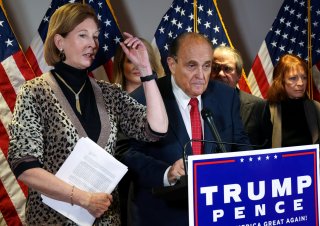 There seems to be a real disconnect between the claims of widespread fraud, a stolen election and illegal voting made by President Donald Trump and his allies and the actual claims formally made by his lawyers in court.

Both Trump in his Twitter feed and White House Press Secretary Kayleigh McEnany in her press conferences have made allegations of broad-based election fraud. But under questioning from judges in Arizona and Pennsylvania, Trump’s lawyers have backed away from actually asserting fraud. Despite Trump’s allegations to the contrary, his lawyers have acknowledged that they are not claiming that dead people voted or that occasional computer glitches were part of a deliberate conspiracy.

In one of several Pennsylvania cases, Trump attorneys actually signed a legal document in which they stated,

The attorney backpedaling is not surprising.

It’s one thing to speculate via tweet, but quite another for an attorney, who is an officer of the court, to make representations to a judge. Trump’s lawyers are constrained in what they can assert by three major restrictions that apply to lawyers: professional ethics, rules of civil procedure and rules of evidence.

As members of the bar association – the state entity that grants attorneys their license to practice law – lawyers have a professional ethics obligation “not to abuse legal procedure” by filing “frivolous” claims. Rule 3.1 of the Model Rules of Professional Conduct, some version of which applies in all states, forbids a lawyer from bringing a claim or argument “unless there is a basis in law and fact for doing so that is not frivolous.”

The bar requires lawyers to “inform themselves about the facts of their clients’ cases and the applicable law” and “determine that they can make good faith arguments” supporting their clients’ positions.

At least outside the context of criminal defense, lawyers must be able to honestly represent to the court that they have a basis for believing they have a path to getting relief either based on existing law or “a good faith argument for an extension, modification or reversal of existing law.”

Violating this requirement could expose the lawyer to sanctions from the state bar, which could range from a reprimand to a fine to a license suspension. More practically, it can erode courts’ confidence in the lawyer’s reliability and damage the lawyer’s professional reputation.

In Trump’s case, this means his attorneys can only say the election was stolen if they know of actual, credible reports of systematic fraud.

Sanctions can be Imposed

Formal disciplinary administrative proceedings against lawyers by the bar for this kind of misconduct are rare. But less rare are motions by opposing parties for sanctions under a different rule.

Federal Rule of Civil Procedure 11 allows an opposing party to move for sanctions against a lawyer who files a frivolous claim or makes a frivolous argument. Most states have an analogous rule for their courts.

Rule 11 provides that when making a claim before the court, the attorney certifies, “after an inquiry reasonable under the circumstances,” that:

For example, if a corporation’s lawyer files an antitrust complaint that she knows to be a stretch, just to block a rival’s merger deal and give her client time to complete its own merger deal first, that would be a violation of Rule 11.

The rule allows any opposing party to ask for sanctions, or for the court to order sanctions on its own initiative. Frequently, such sanctions include paying the other side’s attorney fees for having to do the work to oppose the frivolous claim or argument.

Put Up or Shut Up

As an election law scholar and practitioner, I believe that perhaps the most compelling rule keeping lawyers cautious is the practical consideration that making unsubstantiated claims of fraud is not only unethical but also a waste of time.

Eventually — and, under the accelerated time frame of these cases, that means pretty quickly — the lawyers are going to have to present actual evidence to judges. Without such evidence, judges will dismiss the claim.

And a lawyer making fraud claims without evidence runs the risk that an impatient judge might dismiss an entire case, even if other, legitimate claims are being made.

When it comes to the election fraud claims, watch what the lawyers do, not what the politicians say.