Trump Threatened To Delay Elections. It Isn't the First Time He's Acted Like a Dictator. 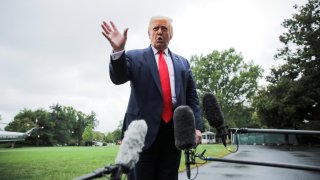 As if America 2020 didn’t already have enough of a banana‐​republic feel to it, lately President Trump has seemed unusually focused on adding to the lingering pall of dysfunctional authoritarianism. First there was his attempt in Portland to use federal law enforcement as a sort of ad hoc internal security force. Now there’s yesterday’s suggestion—on Twitter, naturally—that maybe we should “Delay the Election until people can properly, securely, and safely vote???” I recall a lot of paranoid chatter on the Right a few years back about President Obama building a “civilian national security force” and refusing to leave office; over the last two weeks, Trump’s flirted with both ideas more than Obama did over two terms.

Because the phrasing’s cute enough for plausible deniability, it’s not clear from Trump’s tweet if he’s suggesting he could postpone the November elections himself via executive edict. What is clear, as Walter Olson noted yesterday, is that the president has no such power. Under the Constitution, Congress sets the date for presidential elections; unless Congress changes the law, that election will be held this November 3rd, “whether the president likes it or not.”

During similarly paranoid times 16 years ago, in the run‐​up to the first post‐​9/​11 presidential vote, the Congressional Research Service examined the question of “Executive Branch Power to Postpone Elections,” concluding there was none. Even the broadest possible use—or abuse—of presidential emergency powers “would not appear to have the legal effect of delaying an election, nor would it vest the Executive Branch with the authority to reschedule the election.” And since, per the 20th Amendment, Trump’s term ends at noon on the 20th of January, even if he somehow managed to cancel the election entirely, at that point, under the Presidential Succession Act, Speaker Nancy Pelosi would take the helm. It’s possible Trump hasn’t really thought this through.

In any event, if Trump’s tweet was a veiled threat to postpone the election, it joins a long list of crackpot authoritarian fancies he’s let fly since his inauguration. In just the last two years, this president has (an incomplete list):

Of course, Trump never followed through on any of those threats. Likewise, it’s a pretty sure bet “Delay[ing] the Election???” will never make the transition from idiotic tweet to nefarious plan. (I might, however, put even money on a presidential self‐​pardon attempt before January 20.)

The fact that the 45th president lacks the competence, self‐​discipline, and functional attention span to bring his worst autocratic impulses to fruition is, I suppose, something of a blessing. That doesn’t mean Trump’s authoritarian bluster is harmless. When half of the political class feels driven by partisan loyalty to defend or downplay the president’s open contempt for constitutional limits, it’s likely to make genuine assaults on those limits by future presidents that much easier to execute.

We’ll no doubt hear from the president’s allies that it’s just a tweet, he didn’t mean what you thought he meant, and/​or he was just being “sarcastic.” Trump doesn’t think he misspoke: look at what’s now his “pinned tweet,” with pride of place atop his feed. The guy’s an attention vampire, and all press is good press.

It’s tiresome, if not exhausting. Joe Biden has come in for a fair amount of criticism over his “invisible campaign,” but being unseen and rarely heard may turn out to be a welcome contrast and a campaign strategy with the broadest possible appeal.

This article by Gene Healy first appeared in CATO on July 31, 2020.