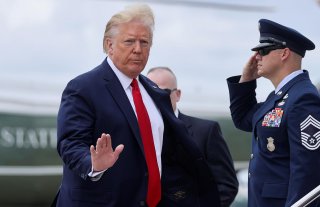 “I hope all Republican House Members vote NO on FISA until such time as our Country is able to determine how and why the greatest political, criminal, and subversive scandal in USA history took place!” Trump wrote on Twitter.

Trump’s advice could potentially throw a kink in plans to reauthorize the surveillance law.

The House passed FISA reauthorization on March 11 on a bipartisan vote — 278 to 136 — with 126 Republicans supporting the measure. Attorney General William Barr voiced support for the House version, and urged its passage in the Senate.

The Senate passed its own version of a reauthorization bill on May 14. Because of differences in language in the bills, the House will vote on the Senate’s measure sometime this week before it can be sent to Trump’s desk.

Trump’s tweet comes after a series of revelations about the FBI’s investigation of the Trump campaign, which involved surveillance both through FISA and the use of confidential sources.

The FBI during the Obama administration also reportedly relied on the FISA process to snoop on a phone call in late-December 2016 between then-Russian ambassador Sergey Kislyak and incoming national security adviser Michael Flynn.

The Justice Department’s inspector general has uncovered a pattern of errors in FBI applications for FISA orders, both against Page and other targets of surveillance.

An IG report on the FBI’s investigation of the Trump campaign said the FBI made 17 “significant” errors and omissions in applications for FISA orders on Page.

FBI agents failed to disclose exculpatory information that undermined the theory that Page was working as an agent of Russia. They also failed to tell the FISA Court about problems with the Steele dossier, which the FBI cited extensively to support the claim of probable cause that Page was a spy.

The Justice Department deemed two of the four FISA orders against Page to be invalid because of the FBI errors.

The FBI’s errors were not limited to the Page investigation, according to the IG. An audit of 29 FISA applications found errors in all of them, the IG said in a report released March 31.