Trump Wants the Navy To Take Out Iranian Gunboats That Get Too Close. Here's How. 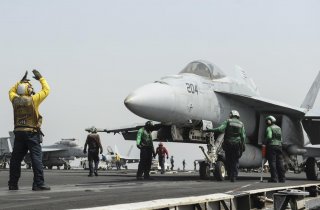 Interceptor missiles, attack drones, deck-mounted guns, electronic warfare weapons and even lasers could quickly be called upon by U.S. Navy commanders to destroy Iranian forces in the Persian Gulf --- should provocations, hostile actions or attacks require a lethal U.S. response.

The U.S. Navy is equipped, prepared and authorized to attack and defend against Iranian threats should that be needed, according to a recent tweet from President Trump and supporting comments from senior Pentagon leaders.

Iranian threats in the Persian Gulf have been on the Pentagon’s radar for many years, as Iranian military units have at times used small attack boat maneuvers and mines near their borders to intimidate forces and commercial ships. These maneuvers and threats -- are by no means unprecedented -- and they have been of particular concern in a narrow Strait of Hormuz waterway connecting the Persian Gulf to the Gulf of Oman; the Strait of Hormuz is a crucial, narrow passageway for international ships, such as oil tankers and other key vessels used for global commerce.

General John Hyten, Vice Chairman of the Joint Chiefs of Staff and Deputy Defense Secretary David Norquist recently spoke to reporters in support of the President’s message. They were clear that current U.S. commanders absolutely have the “authority” to engage and destroy Iranian boats and weapons … should that be necessary. The intent of the message, at least in part, seems to clearly warn Iran not to seek to capitalize upon the current U.S. COVID 19 crisis and explain that the U.S. military is still “ready for war” if necessary.

These current circumstances almost instantly lend themselves to a host of pertinent questions, and a bit of an analytical discussion regarding --- “just how would the U.S. Navy quickly destroy Iranian forces should they need to?”

”If we see hostile intent, we have the right to respond up to and including lethal force, and if it happens in the Gulf, if it happens in any way, we will respond with overwhelming lethal force, if necessary, to defend ourselves, and it's really that simple. But nobody should doubt that the commanders have the authority right now to respond to any hostile act or hostile intent,” Hyten told reporters recently, according to a Pentagon transcript of the discussion.

While it is unlikely, if not almost a certainty, that Navy ships would not attack Iranian assets in a pre-emptive way without first being seriously provoked and threatened -- there are a series of ship-based Navy weapons which could be quickly utilized.

With this in mind, both Hyten and Norquist responded to reporter questions as to whether this authorization or comment from President Trump in any way constituted a shift in policy or engagement strategy -- by simply reinforcing Trump’s message that the U.S. Navy would respond with force if necessary.

“Every commander that's deployed has the ability to execute that,” Hyten said.

Deck-mounted 5-inch guns, now arming Navy cruisers and destroyers, may upon first glance come to mind, as they can blanket areas with lethal munitions at ranges out to 12km. In support of these guns, Navy surface ships, such as amphibs, carriers and Littoral Combat ships, are equipped with varying deck-mounted guns and interceptors -- to include .50-cal machine guns and 57mm “small boat destroying” weapons (on LCS)​.

For instance, Navy surface ships are armed with an “area” interceptor weapon called Close-In-Weapons System (CIWS), a so-called phalanx gun engineered to fire hundreds of small metal projectiles in seconds; it can fire 4,500 rounds per minute. The weapon, while initially designed as a counter air drone, missile and even helicopter interceptor, has in recent years been upgraded into a “1B” variant specifically tailored for anti-surface warfare. This means the CIWS weapon is fully capable of destroying swarms of attacking small boats moving on the surface at close ranges. The CIWS gun is connected to ship-based radar, fire control and command and control technologies to activate quickly in the event that a surface ship is attacked. CIWS is often referenced as a “last-line” of defense in the Navy’s layered ship defense systems which include longer range-interceptor missiles such as an SM-3 for ballistic missile defense and closer-in offensive and defensive weapons such as an SM-6. Even closer-in attacking threats include ship weapons such as a Rolling Airframe Missile or SeaRam interceptor.

Norquist seemed to make a specific comment about the “defensive” weapons available to Navy commanders.

In addition, many Navy ships are armed with an upgraded variant of the Evolved Sea Sparrow Missile Block 2, a missile built with an advanced seeker, guidance system and ability to take out sea-skimming anti-ship cruise missiles closer to the water. More recent ship-defense weapons included new iterations of Electronic Warfare and even lower-cost precise lasers designed with optics to detect -- and then incinerate -- incoming attacks. EW could of course be used to jam or thwart the electronic sensors and guidance systems of approaching weapons, therefore disabling their ability to strike. Laser and EW would of course be advantageous in highly trafficked waters with commercial or civilian ships in the area, as they would likely produce lower amounts of potentially harmful debris or fragmentation.

Iran is of course known to possess a large arsenal of ballistic missiles, so what this layered defense system of technologies and weapons means is that the surface Navy would by and large be prepared to find and take out most, if not all, Iranian attack weapons. Also, it goes without saying that Navy warships are armed with a wide range of offensive weapons engineered for rapid, precise attacks.

Finally, any key component of offensive and defensive maritime warfare pertains to stand-off range and surveillance. A target must of course be seen in order to be destroyed. With this in mind, Navy or even Air Force-launched drones are flown with the specific purpose of finding threats over the horizon, in some cases well beyond target identification technologies built into some ship-based sensors. For example, for many years now, Navy destroyers have deployed with a system called Naval Integrated Fire Control - Counter Air (NIFC-CA) -- a networked weapons system which uses an aerial node sensor such as a Hawkeye surveillance plane or even F-35 to find and pinpoint threats from beyond the horizon. Drawing upon advanced radar and communications technology, threat data and targeting information is then sent to ship-based commanders, who can launch SM-6 interceptor missiles to take out an approaching threat at safer stand-off distances; developers make the point that this system can also be used for offensive attack. In effect, a system like NIFCA would be used to destroy swarms of Iranian boats long before they might be in range to attack Navy surface ships.

To support these concepts and tactics, Navy weapons developers have been making fast progress with ship-based command and control, or ISR networking systems. This amounts to an ability to receive and process incoming sensor data such as live video feeds from drones or networked communications from helicopters, surveillance aircraft, other surface ships and even submarines. Interestingly, fast-advancing iterations of AI and computer automation are now being developed to make this process even faster, by organizing incoming sensor data for commanders - at times in a matter of seconds.

Osborn previously served at the Pentagon as a Highly Qualified Expert with the Office of the Assistant Secretary of the Army - Acquisition, Logistics& Technology. Osborn has also worked as an anchor and on-air military specialist at national TV networks. He has appeared as a guest military expert on Fox News, MSNBC, The Military Channel and The History Channel.

This first appeared in April 2020.

Image: An F/A-18E Super Hornet prepares to launch from the flight deck of the aircraft carrier USS Nimitz in this U.S. Navy handout taken in the Red Sea in this September 3, 2013 handout from the U.S. Navy. Mass Communication Specialist 3rd Class Nathan R. McDonald/U.S. Navy/Handout via Reuters.