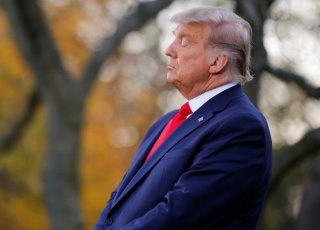 President Donald Trump's recent firing of Defense Secretary Mark Esper and subsequent resignations from the department of four more top civilian officials -- either in protest or under pressure -- are raising alarms in Washington. All were replaced by people with questionable qualifications.

One defense official described the situation to CNN as “scary” and “very unsettling.”

On Nov. 17, Trump also fired the cybersecurity director at the Department of Homeland Security, who had rejected the president’s claims of election fraud. Trump is reportedly weighing the additional termination of CIA director Gina Haspel as part of a late-term purge.

The transition period between two administrations, especially ones that are ideologically opposed, can be a socially and politically unstable time. Trump’s refusal to concede increases that instability this year.

A lapse in preparedness can be deadly. According to the 9/11 Commission, the unusually short transition period between the Clinton and Bush administrations – truncated by the dispute over the election’s outcome – resulted in some of the intelligence and policy deficiencies that allowed Al-Qaida to attack and kill close to 3,000 Americans.

Political appointments have always influenced the American security apparatus. But this problem has intensified dramatically in recent years. If security and intelligence agencies make decisions based on narrow political considerations like satisfying the personal grudge or campaign promise of a president, it can put lives at risk.

Trump’s latest Defense Department appointments have some necessary policy experience. But their main attribute appears to be loyalty to the president. Loyalty goes beyond partisanship. It means policy decisions may be subject to the personal interests of the president.

For example, Defense Secretary Esper may have lost his job for opposing the sped-up withdrawal of American troops from Afghanistan now underway. A withdrawal is in line with Trump’s 2016 campaign pledge to end “endless wars.” One former CIA official described the Afghanistan troop drawdown as “reckless.”

Brig. Gen. Antony Tata, who on Nov. 10 replaced Esper’s second-in-command James Anderson as undersecretary of defense for policy, is known for his vocal criticism of Democrats. In one 2018 tweet he called former President Barack Obama a “terrorist leader.”

Politicization undermines the ability of the intelligence community to deliver an unbiased, accurate and critical assessment of U.S. security policies and potential threats. That compromises the standing and effectiveness of these agencies.

“If people believe that our intelligence community is politicized, it will lose its credibility,” wrote intelligence veteren Michael Morell, a former CIA acting director, in a blunt Oct. 12 Washington Post op-ed. “Its views on important issues will carry less weight with policymakers and the American people, and it will therefore be less effective in warning of threats to our national security.”

“We will all be less safe as a result,” Morrell concluded.

Ratcliffe lost credibility within months of his May 2020 confirmation when he overrode the advice of numerous colleagues to declassify “at the direction of the president of the United States” sensitive information based on unsubstantiated Russian sources.

The intelligence, which alleged that Hillary Clinton tried to create a scandal in 2016 by tying Trump to Russian hacking, was released 35 days before the 2020 election in an apparent bid to damage the Democratic Party.

Intelligence may be declassified when “public interest in disclosure outweighs the damage to national security.” Ratcliffe’s case did not meet this bar, according to experienced legal experts.

One of Congress’ major duties is to supervise and monitor the various agencies of the executive branch. Legislative supervision is carried out via the control over budgeting, appointments and specialized investigative and legislative forums and committees.

Congressional oversight is particularly important with secretive agencies like the CIA, National Security Agency and the FBI.

These agencies have powers that can undermine constitutional guarantees, civil rights and international law. They undertake missions that may endanger American lives and have far-reaching consequences for the United States’ domestic security and international relationships. Occasionally they have violated legal norms.

Yet in August Director of National Intelligence Ratcliffe announced he would end in-person briefings to Congress until after the Nov. 3 elections, allegedly to reduce leaks. Ratcliffe reversed his decision after pressure from Congress. But attempting to keep U.S. intelligence from lawmakers was unprecedented.

End of an era

Congressional supervision of defense and intelligence functions was, until recently, one of the few reliably bipartisan enclaves of American politics.

From Republicans like the late Sen. John McCain to Democrats like President-elect Joe Biden, lawmakers from both sides of the aisle have come together to ensure these agencies work in legal and ethical ways to protect national security.

Congress authorizes wars, anti-terror missions, foreign negotiations and even the detention of American citizens based on the intelligence it receives. Oversight allows Congress to trust this information is accurate, unbiased and realistic.

Congressional supervision is a check on the executive-controlled intelligence and security agencies. With the country experiencing political and social instability, this civilian authority is more critical than ever.