Trump's Troop Withdrawal From Germany Is a Gift To China 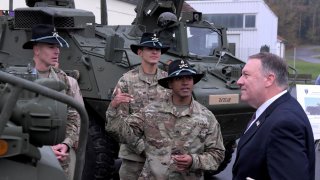 Make no mistake: The Trump administration’s plan to remove and realign US forces in Germany and throughout Europe is much more than a fit of presidential pique at Germany or Chancellor Angela Merkel; it is a crippling blow to America’s role in Europe and the alliance it leads.

The tell-tale heart of this retreat is not in its flamboyant politics but in the crucial military details. In the wake the 2014 invasion of Ukraine, even the Obama administration realized that a continued reduction in US forces in Europe was a mistake. It put the brakes on its own drawdown plans and quickly pulled a “European Reassurance Initiative” out of its hat. This stopgap was meant to deter further Russian revanche in two ways: expanding US and alliance troop presence in Eastern Europe and beefing up the firepower and mobility of American land forces in and available in a European crisis. The new Trump scheme reverses both of those critical steps.

Indeed, the plan removes the very cornerstone of what has been a very modest and slow-moving reconstruction project: the 2d Cavalry Regiment, based in Vilseck, Germany, which is about 25 miles from Nuremburg in eastern Bavaria and the same distance from the Czech border. From there, the unit has been the central instrument of the frenetic attempt to restore credible deterrence in the “post-Crimea” era. In March 2015, less than a year after the Russian annexation of Crimea and just months after the invasion of eastern Ukraine, the regiment conducted a well-publicized “Dragoon Ride” — the unit is equipped with wheeled Stryker vehicles and thus can drive itself on civilian roads — exercise, rolling over 1,100 miles from Germany through the Czech Republic, Poland, Lithuania, Latvia, and Estonia. It has conducted similar and growing exercises in each subsequent year; this past summer, it turned southward toward the increasingly contested Black Sea region, driving to a training area south of Budapest, Hungary and then onward to a range in central Romania, where it engaged in both fairly sophisticated combined-arms live-fire training with the Romanian army, employing engineer, artillery, and combat aviation assets.

This agility and lethality — the regiment is equipped with the latest version of the Stryker, with a powerful 30mm cannon and mounted Javelin missiles, giving it the firepower of a mechanized Bradley fighting vehicle — has made the 2d Cavalry the perfect covering force for Europe. Having it centrally stationed on the continent also enabled the “reassurance initiative” to return fully armored, tank-based brigades to the theater. The Stryker-equipped cavalry had enough punch and endurance to give stateside heavy units a reasonable chance to deploy.

With the cav’s withdrawal, US Army Europe will have few cards to play early in a crisis. Its sole remaining major maneuver unit is the 173d Airborne Infantry Brigade, based primarily in Vicenza, Italy. These paratroopers are lightly armed and would rely on Air Force transports to deploy — their base is no closer to the Black Sea and much farther from Poland or the Baltic states. Moreover, as the only airborne unit outside the United States, they are a “contingency response force” for US Africa and Central commands as well as Europe.

Moreover, Defense Secretary Mark Esper has revealed that the new rotational plan for Europe will be conducted by Stryker units rather than armored brigades. Currently, the active-duty Army fields just seven Stryker brigades (versus 11 armored) and half of those are stationed outside Seattle, Alaska, and Hawaii and “aligned” to the Pacific theater. The mathematics of forward presence and reinforcement in Europe will be all but self-defeating.

In sum, the deterrent value of US military posture in Europe stands to be decimated, as recently retired US commanders have vigorously argued. Admiral James Stavridis, Supreme Allied Commander for Europe in 2013, and Lt. Gen. Ben Hodges, who as head of US Army Europe helped to design and carry out much of the “reassurance initiative” for Europe, described the withdrawal plan as a “gift for [Russian President Vladimir] Putin. Lt. Gen. Mark Hertling, also a USAEUR chief, called on Congress to “stop it.”  Alas, that seems unlikely: The House version of the annual defense bill bars the withdrawal, but the powerful anti-Trump sentiment in the House is focused on other issues, and the Senate is not likely to intervene, having voted down an amendment to its version of the bill brought by Utah Sen. Mitt Romney.

Finally, the Germany withdrawal reveals that the administration’s approach to “great-power competition” is more like a kiddie soccer game than a game of global chess. Abandoning Europe to chase after East Asia is not only a gift to Russia, but to China — is Chancellor Merkel now more likely to exclude Huawei from its 5G system? To sanction Chinese officials for their oppressions of Chinese Uighurs or Hong Kong?

This article by Giselle Donnelly first appeared in AEIdeas on August 10, 2020.