The Truth About the Democrats Plan to Save the Economy 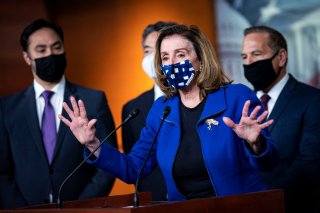 First, the Democrats’ $15 federal hourly minimum wage mandate was ruled out by the Senate’s parliamentarian because it didn’t conform to the rules of the Senate for passing reconciliation bills with a 50-vote threshold.

So, Democrats pivoted to a new, even worse plan.

The “Plan B” worker tax would have imposed new tax increases on American employers equal to 5% of their payroll costs if they employed workers earning less than “a certain amount.” That amount wasn’t specified, but could be the same annual levels as the proposal to raise the minimum wage to $15 an hour by 2025 and index it for inflation thereafter.

As Matt Haller, a spokesman for the International Franchise Association, put it, “The only thing worse than doubling the labor costs of small businesses is disguising it through a backdoor tax increase in the middle of a pandemic while they are still struggling to recover from the worst economic downturn in nearly a century.”

President Joe Biden and Democrats in Congress are already contemplating their next move to impose a nationwide $15 minimum wage.

But no matter the method—doubling the hourly minimum wage to $15, imposing punitive taxes on employers who hire low-skill and entry-level workers, or whatever lawmakers propose next—attempting to raise wages through government fiat would instead eliminate jobs and increase prices.

The economic fact is that when the government forces businesses to pay an employee a mandated hourly wage, businesses are left with few options: cut hours, lay off workers, reduce benefits, and increase prices—or some combination thereof.

Most often, businesses are forced to cut jobs, which is why the Congressional Budget Office reports that raising the minimum wage to $15 an hour nationwide would result in 1.4 million lost jobs in a few short years.

The policy would harm younger, less-educated, and otherwise marginalized workers the most—some of the same populations that have been hardest hit by the pandemic.

Under a $15 minimum wage, child care costs would rise by thousands of dollars—21% on average, and by more than 30% in 10 states.

Food prices would also increase, including an estimated 38% increase in fast-food prices.

Another unintended consequence is increased automation. Some companies, such as Amazon, have achieved a $15 minimum wage by automating jobs that produce less than $36,000 per year in value (the cost to employers, with taxes, of a $15-per-hour job).

Democrats know that their wage-mandate policies will hurt workers and force businesses to make tough and unnecessary trade-offs with Americans’ livelihoods, such as moving jobs overseas or replacing full-time employees with part-time contractors.

That’s why “Plan B” included measures to further tax and penalize businesses that would have tried to adapt to the new mandates.

But that’s a slippery slope into government micromanagement of private companies’ decisions.

If liberal lawmakers continue to intervene in the decisions of private-sector companies—attempting to play CEO instead of elected official—that could lead to all sorts of new administrative, legal, and financial problems.

For example, will the IRS need a new department set up to call into question every overseas hire and each contractor with whom companies do business, to ensure they are not trying to evade U.S. wage mandates?

Ultimately, many businesses simply won’t be able to shift their costs or restructure their labor force enough to remain profitable with something like a $15 hourly minimum wage mandate and will go out of business.

Job losses of 1.4 million is only a starting point for the Democrats’ proposed tax on workers.

That’s because lawmakers can’t create good jobs or higher incomes simply by mandating them into existence. Opportunities and income growth come from workers achieving the education and experience necessary to help them produce more value.

Cutting off the bottom rungs on the career ladder through a $15 national hourly minimum wage and threatening employers with new taxes on entry-level and low-skilled jobs will do far more harm than good for workers and the American economy.

There are ways, however, that lawmakers can help workers achieve higher incomes without taking away others’ jobs and incomes or taxing employers who provide jobs.

This article was first published in the Daily Signal.