Turkey's Drone Boats are a Signal to Greece: Don't Mess With Us 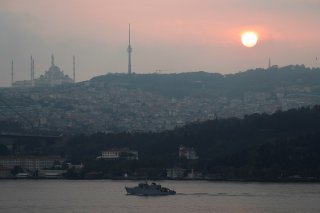 Here's What You Need To Remember: The unmanned boat is small, but heavily armed. It forms part of Turkey's planned "Blue Homeland" defense strategy against Greece; the two nations have steadily become more hostile over the past year.

A pair of Turkish defense companies, METEKSAN and Ares, revealed a jointly built unmanned boat, named ULAQ. The small vessel is the first of what is planned to be a line of at least several unmanned surface ships of varying sizes and capabilities.

According to METEKSAN, their ULAQ has a some pretty impressive abilities for an initial prototype: “[The ] ULAQ…has been built from advanced composites, has 400 km range, 65 km/h speed, day/night vision capabilities, encrypted communication infrastructure, which can be operated from mobile vehicles and headquarters or from sea platforms such as aircraft carriers or frigates, will be used for missions like intelligence, surveillance, reconnaissance, surface warfare, asymmetric warfare, escort missions, strategic infrastructure protection.”

Artistic renderings of the ULAQ shows it with a centrally located weapons station with two types of missiles, the 70mm Cirit missile arranged in a four-missile pod, as well as two L-UMTAS missiles.

Though both missiles were originally designed as anti-personnel and anti-tank air-to-surface missiles respectively, it is presumed that they have been modified for maritime use. Both the missile systems and the boat itself were designed with “maximum indigenousness.” And here’s why that matters.

The timing of the small, armed but unmanned boat comes at a trying time for Turkey. The country’s eastern Mediterranean coast has been the scene of tensions recently. Relations between Greece and Turkey—both members of the North Atlantic Treaty Organization alliance—have been strained due to conflicting maritime claims in the Aegean Sea, part of the Mediterranean Sea that separates the two countries.

In particular, Turkey has sent fossil fuel exploration ships to parts of the Sea that are claimed by Greece, to which Athens replied by sending several Hellenic Naval ships to the area. This in turn prompted France and the United States to send warships to the area as well in a bid to keep the peace between the two treaty allies that nonetheless have experienced very strained relations in recent years.

Ares and METEKSAN’s press releases announcing the new drone boat left no room for doubt about what their ULAQ gunboat is intended for. The report even quoted METEKSAN’s CEO, who stated that “We have once again understood the importance of the ‘Blue Homeland’ defence, Economic Exclusive Zone protection, protection of maritime borders of the Turkish Peninsula especially with recently emerging disputes…May ULAQ bring the best of luck and success to Turkish Armed Forces and to Blue Homeland.”

Make no mistake—Ankara is putting its money where its mouth is when it comes to Turkish interests in the Mediterranean.