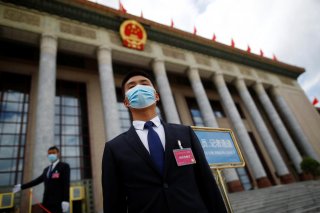 Tech experts who worked with Twitter to remove 170,000 accounts tied to the Chinese government say the profiles promoted deceptive content regarding the coronavirus pandemic.

The accounts were “spreading geopolitical narratives favorable to the Communist Party of China,” Twitter wrote in a blog post announcing the move, which comes as the company faces withering criticism from the Trump administration for not doing enough to target pro-China propagandists. The company removed them for violating the platform’s manipulation policies.

“Narratives around Covid praise China’s response to the virus while tweets also use the pandemic to antagonize the U.S. and Hong Kong activists,” an analysis of the tweets by the Stanford Internet Observatory noted, according to a CNN report Thursday on Twitter’s decision.

Twitter removed 23,750 accounts that compromised the core network, which were highly engaged and posted frequently, and another 150,000 accounts that were merely designed to promote the core group’s content.

Israeli data firm Next Dim located two tweets from pro-China accounts with small followings that were liked and reposted hundreds of thousands of times in March, The New York Times noted in a report Monday discussing the group’s findings.

Next Dim’s findings raise the potential that a giant crew of social media influencers intervened to help the tweets go viral, the report noted.

Next Dim located a March 12 tweet from user @manisha_kataki, who posted a video of workers spraying streets in China with disinfectant and wrote: “At this rate, China will be back in action very soon, may be much faster than the world expects.”

Another user with the handle @Ejiketion retweeted the post along with the video the next day, telling his Twitter followers that Westerners are meanwhile “washing our hands LOL.” The account has since been deleted, according to TheNYT. Both tweets received more than 382,000 retweets and 1.1 million likes, many of them within the first two days.

Twitter’s blog post Thursday did not mention the fate of one of China’s largest and most prolific promoters of misinformation.

China’s deputy director of the Foreign Ministry’s Information Department Zhao Lijian was one of the first Chinese officials on Twitter to push a theory suggesting the virus originated at a U.S. Army base that houses and researches infectious diseases. The theory accelerated after Chinese embassy accounts in France and Jordan retweeted Zhao’s post, the data showed.

Officials believe coronavirus, or COVID-19, originated in Wuhan, China, before spreading worldwide before reportedly killing 110,000 people in the United States. Twitter applied a fact-check label to his March tweet in May, but Zhao’s account has not yet been removed.