Two Recessions? Wall Street Thinks We Might Be Headed Towards a Coronavirus Catastrophe 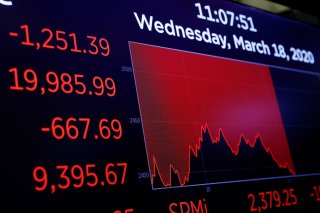 Pick whatever letter or corporate logo you want when describing the current economic rebound. But the situation would certainly be brighter if coronavirus cases and deaths were declining rather than increasing. Many bullish Wall Street economic forecasts of a month or two ago assumed COVID containment and control. That does not seem to be happening. And it needs to. As my AEI colleague Michael Strain states in a new Bloomberg column, “The economy can’t recover until the virus is contained.”

Again, the virus is not contained, although we wish it were so. Maybe we wished too hard that it were so. As economist Mark Zandi of Moody’s Analytics writes in a new note:

The overly rapid business reopenings, combined with the chaotic management of the healthcare crisis, has reignited the pandemic. Infections, hospitalizations and deaths are quickly rising in much of the country, and it appears they are set to get much worse. A growing list of states are rolling back their reopenings, and others have paused theirs. The economic damage is already becoming clear. Initial claims for unemployment insurance, which fell sharply from mid-April to early June, have been stuck at over 2 million per week. With hiring now slowing as businesses are required to close again, or at least impose tighter social distancing, it is increasingly likely that the layoffs will overwhelm the hiring, and there will be more job losses—probably not in July, as the Bureau of Census is hiring lots of census takers and a statistical quirk will lift teacher jobs—but later this summer.

So, as Zandi concludes, “The economy is sputtering again.” This Goldman Sachs chart suggests that’s happening in the labor market:

But sputtering and stalling doesn’t have to turn into swooning, doesn’t have to become a double-dip recession. No one wants that. And Zandi doesn’t expect that if Washington does its job with Congress and President Trump agreeing to a “sizable” fiscal rescue package.

Fine. But what about the “Phase 4” details? Ideally, Strain writes, such a package would contain these elements: more bonus payments to the unemployed (though beginning to scale back the $600 weekly payment while also adding a one-time re-employment bonus), an increase in the child tax and earned income tax credits, extending the Paycheck Protection Program for small business (including more funding and flexibility), more public health funding, and more grants to state and local government (though with conditions attached to prevent aid being funneled into underfunded state pensions). Those are the broad strokes.

Zandi particularly emphasizes increased aid to state and local governments. If Washington fails “to agree to help out hard-pressed state and local governments … [they] will have no choice but to slash programs and jobs, and the unemployed no choice but to stop paying bills and curtail their spending. The economy will suffer a double-dip, and unemployment won’t fall back into single digits until the pandemic is well over.”

So let’s avoid a double-dip downturn — and then focus on making sure the post-vaccine expansion is as robust as possible.

This article by James Pethokoukis first appeared in AEIdeas on July 20, 2020.