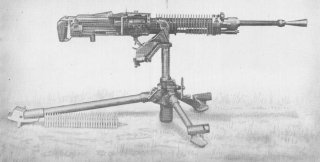 Here's What You Need to Remember: The Type 3 was an excellent example of a good infantry weapon that served far too long, ultimately to the detriment to the troops it was supposed to arm. Even when a smaller, lighter gun that weighed a mere fifth of the Type 3 was invented, the Japanese military would not retire the older, heavier, clunkier gun. Only the end of World War II, and Japan’s defeat, would bring an end to Hotchkiss-style machine guns in Japanese service.

One of the most infantry-heavy armies of World War II was the Imperial Japanese Army. Although the country itself is today synonymous with innovation, the infantry weapons used by the Imperial Army and Navy were generally copies of European weapons ill-suited for notoriously small-statured Japanese soldiers. Such weapons often remained in service much longer than prudent. An example of this was the Type 3 machine gun, which at the time of its introduction weighed as much as a Japanese soldier.

In the late 1890s, the Austrian arms inventor Captain Baron Adolf Odkolek von Ujezda designed a new machine gun. The concept of the machine gun was fairly new but von Ujezda’s design differed from others in being gas-operated, rather than recoil-operated. Unlike other machine guns, which relied on bulky water jackets to cool a hot barrel, the new gun used ambient air to reduce barrel heat. The design for the machine gun was finalized in France, where it was known as the Hotchkiss, serving as the front-line machine gun during World War I.

The Imperial Japanese Army came into being during the Meiji Restoration, a period of breakneck modernization, and Tokyo imported French advisors in the late nineteenth century to help build the first real national Japanese Army. This gave France a considerable amount of military prestige in Japan and it’s probably no accident that the country adopted the Hotchkiss Modéle 1900 machine gun. Hotchkiss guns served the Imperial Army during the Russo-Japanese War of 1904-1905, where trench warfare and massed infantry tactics gave the world a glimpse of the future of warfare.

In 1914, the Imperial Army adopted a modified version of the Hotchkiss heavy machine gun. The gun was designated the Type 3, so-called because it was adopted during the third year of the reign of the Emperor Taisho (1912-1926). Japan’s Hotchkiss guns were chambered for the Japanese 6.5-millimeter (.30 caliber) rifle cartridge, the same caliber powering the Arisaka rifle. This was a major plus for an infantry unit, allowing Japan’s army to streamline its logistics and by carrying just one rifle and machine-gun round. The downside was that the 6.5mm round did not have the range and power of other heavy machine guns.

The Type 3 machine gun was developed by General Kijiro Nambu, a famous Japanese arms expert with a mediocre design record that included the infamous Nambu handgun. The Type 3, like many Hotchkiss variants, included a built-in gravity-fed oil reservoir that oiled bullets as they were fed into the chamber. The bullets themselves were loaded into flat 30 round trays that passed through the machine gun action as the weapon was fired.

The Type 3’s Hotchkiss lineage was clear to all but the gun still retained Japanese touches. Nambu added larger, more pronounced ribbing on the barrel sleeve to increase surface area and bleed off heat. This gave the Type 3 a drill-like appearance. The Type III also had a different shell casing ejection system, borrowing from the British-designed Lewis machine gun.

The Type 3 in 6.5-millimeter was essentially a light machine gun, though there was nothing light about it in the physical sense. The machine gun weighed a staggering 122 pounds with a tripod, or 62 pounds without, though there was no way to operate the gun without the tripod. One interesting, but not altogether necessary innovation introduced by the Type 3 were sockets in the tripod’s feet. Japanese soldiers could pass poles through the sockets, enabling the weight of the 122-pound machine gun to be split more or less evenly by a team of four men.

The machine gun was 47 inches long with a 29-inch barrel, and the barrel length would have given the weapon a very minor improvement in range and velocity over a Type 38 Arisaka rifle firing the same cartridge. The machine gun retained the same rate of fire as the original Hotchkiss, or approximately 450 to 500 rounds per minute. Ironically, the 6.5-millimeter round fired from the Type 3 had a greater muzzle velocity than the original 8-millimeter Lebed round had fired from the Hotchkiss.

By the 1930s, Imperial Japanese forces in China concluded that the 6.5-millimeter round was underpowered, and a new version of the Type III--the Type 92—was fielded in the larger, heavier 7.7x58 millimeter round. The Type 92 served on through World War II, though it was clearly obsolete at this point and were superseded by much lighter guns such as the Type 96 and Type 99. The Japanese military, however, would not discard a perfectly good gun in wartime, and the Type 92 served through the Chinese and Pacific theaters of World War II. The gun also served with the North Korean People’s Army in the opening stages of the Korean War.

The Type 3 was an excellent example of a good infantry weapon that served far too long, ultimately to the detriment to the troops it was supposed to arm. Even when a smaller, lighter gun that weighed a mere fifth of the Type 3 was invented, the Japanese military would not retire the older, heavier, clunkier gun. Only the end of World War II, and Japan’s defeat, would bring an end to Hotchkiss-style machine guns in Japanese service.