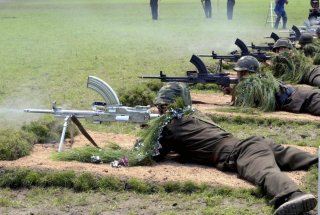 Here's What You Need to Remember: The cylindrical magazines were larger the traditional 30-round “banana” magazines and estimated to carry between 100 and 150 rounds. That’s up to five times more firepower than conventional magazines. How reliable this new magazine is anyone’s guess, but one thing is for sure: it will certainly be heavier.