Uh-Oh: F-35 Jets and Their Carriers Can't Talk to Each Other 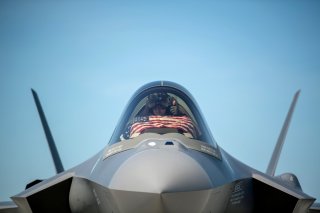 Here's What You Need to Remember: In the near future, the Marines could use a drone to gather and relay data from F-35s. The new Group 5 drone, which the Corps hopes to deploy on assault ships starting in 2026, could possess the hardware and software to receive and “fuze” data from F-35s before passing it along to ships and ground forces.

The U.S. Marine Corps and U.S. Navy are moving quickly to adapt some of the fleet’s amphibious assault ships to embark large numbers of F-35B stealth fighters, transforming the amphibs into light carriers that can complement the Navy’s full-size flattops.

But there’s a problem. The F-35 is a “fifth-generation” plane with powerful sensors. It produces large volumes of data that can help it and other forces surveil, track and target the enemy.

The Navy’s 10 Wasp and America-class amphibious assault ships, by contrast, still are “third-generation” vessels and possess only limited capacity to receive, process and pass along the raw information that the F-35 generates.

That mismatch could limit the light carriers’ combat power. “I don’t want to bring Marine aviation down to third- and fourth-gen,” the Corps’ former director of expeditionary warfare Maj. Gen. David Coffman said in 2018. “I want to bring the rest of the Marine Air-Ground Task Force up to fifth-gen and exploit that technical expertise and have a fifth-gen MAGTF. The problem is, we’re having to embark a fifth-gen MAGTF on a third-gen ship, and we have to fix that.”

The U.S. Navy amphibious assault ship USS America in 2019 set sail across the Pacfic region with no fewer than 13 U.S. Marine Corps F-35B stealth fighters aboard. As an earlier proof of concept, USS Wasp in March 2019 deployed to the Pacific region with no fewer than 10 F-35Bs aboard. America in May 2019 forward-deployed to Japan, freeing up Wasp to return to the United States for maintenance.

A Navy assault ship usually embarks just six F-35s or older AV-8B Harrier jump jets plus dozens of helicopters. The vessels can increase their fixed-wing component by reducing the number of helicopters. At a minimum, an assault ships needs just a pair of H-60 helicopters for search and rescue.

But the constraints the American light carriers’ datalinks and command-and-control systems impose on the F-35 could limit the vessels’ effectiveness in a major war. To work around the inferior systems on the Wasp- and America-class vessels, the fleet is experimenting with a more flexible approach to command and control.

The Navy’s San Antonio-class LPD amphibious transports, while lacking the big flight decks of the Wasp- and America-class vessels, possess much more sophisticated command-and-control systems than do the larger amphibs. “LPDs controlling F-35Bs in flight could help the Navy better tap into the capabilities of the jet, in addition to providing more options during an operation distributed across a vast operating space,” USNI News explained.

An LPD, presumably the Japan-based USS New Orleans, accompanied America on her late-2019 cruise with 13 F-35Bs and helped to control the fighters during training. LPDs could function as command platforms for strike groups centered on light carriers, helping to mitigate the plane-ship mismatch.

In the near future, the Marines could use a drone to gather and relay data from F-35s. The new Group 5 drone, which the Corps hopes to deploy on assault ships starting in 2026, could possess the hardware and software to receive and “fuze” data from F-35s before passing it along to ships and ground forces.

But the Group 5 drone program is in trouble. After spending just $11 million on the effort in 2019, the Marines requested from Congress $25 million to continue developing the drone in 2020. But Congress approved just $22 million. “Lawmakers skeptical of the Corps’ ability to operate a larger Group-5 drone led to cuts,” Marine Corps Times reported.

The House Armed Services Committee in 2018 explained ed that it “believes the Marine Corps underestimates the required communications, datalink, launch, mission execution and recovery infrastructure or the human capital resources required to train, operate, maintain and sustain such a system.”