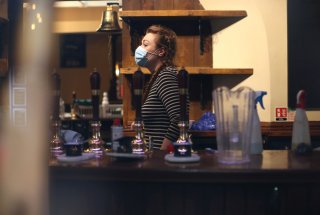 A series of new measures has been announced to stem rising cases of coronavirus in the UK.

People are again being encouraged to work from home if they can, while pubs and bars will be required to close at 10pm. Masks will be required for hospitality workers and passengers in taxis, weddings will be restricted to 15 guests and funerals to 30, and plans to resume certain sporting events will be put on hold. Businesses that are not deemed “COVID-secure” will be forcibly closed.

“Never in our history has our collective destiny, and our collective health, depended so completely on our individual behaviour,” said UK Prime Minister Boris Johnson in a public address. “If we follow these simple rules together, we will get through this winter together,” he added.

Earlier, in Scotland, the country’s First Minister Nicola Sturgeon announced that there visits between households will be banned, a move also taken in Northern Ireland. In a separate address, Wales’s First Minister Mark Drakeford announced that pubs, cafes and restaurants in the country would also be required to close at 10pm. Drakeford also called on people in Wales to avoid unnecessary travel.

These new restrictions came a day after England’s Chief Medical Officer Professor Chris Whitty and UK Chief Scientific Adviser Sir Patrick Vallance presented a sombre and stark briefing to the public of the deteriorating trends in COVID-19 infections in the country.

Around 60,000 people were infected in England and Wales in early September, with around 6,000 new cases a day. Infection numbers have been doubling around every seven days, which if left unchecked would mean 50,000 new infections a day by mid-October. That would be followed a few weeks later with hundreds of COVID-related deaths.

These estimates are both plausible and concerning. It’s also worth remembering that heightened levels of infection in a community will eventually spill over into schools, hospitals, care homes and other vulnerable environments.

It looks like the UK is heading for a challenging winter. A report by the Academy of Medical Sciences in July had warned of a worst case scenario of a large epidemic surge peaking in January-February 2021.

This would be on top of disrupted health and social care systems still recovering from the first wave of the pandemic, a backlog of non-coronavirus care for treatments that were postponed earlier this year, and the additional pressure that a potential influenza epidemic as well as other winter respiratory illnesses will add.

The report’s authors estimated there may be up to 119,000 COVID-19 related deaths in the UK between September 2020 and June 2021, more than double the number seen during the first wave.

UK governments thus have a difficult balance to strike between maintaining livelihoods and protecting lives from the pandemic. Stricter infection control measures will slow the virus down, reduce the occurrence of outbreaks, and undoubtedly spare lives. But these same control measures will curtail economic activity and comes at a cost to businesses and jobs.

Some may argue that the economic costs of control measures are excessive, but on the flip side, while it may be possible to revive an economy, it is not possible to resurrect the dead. There is no evidence that the lethality of this virus is waning. While the population may be increasingly fed up with disease control requirements, the virus has not changed.

Many societal activities come at a cost in terms of added risk of infection spread, from going to school to eating and drinking at bars and restaurants, attending sports events and religious gatherings, or going back into the office. There is consequently a trade-off – if we want to keep some sectors going (such as education) it will mean having to limit activity in other sectors (for example, the hospitality industry). In this case, the hope is that by restricting the hospitality sector and discouraging people from going into the office, numbers will be brought down sufficiently to avoid a full lockdown.

It is worth noting that the pandemic risk is not static but is likely to change over time. The numbers of infections, deaths and geographical distribution of outbreaks will vary across the country. This will undoubtedly lead to a need for governments to monitor and reassess the nation’s risk, and tailor its pandemic response accordingly. None of the potential additional measures are surprising, only differing in terms of how stringently they would be applied and for how long.

If the regulations that have been announced this week are not sufficient, governments will also have to consider bringing in some combination of the following:

Finally, while the focus is on targeted local intervention and lockdowns where necessary, should the pandemic spiral out of control and transmission become widespread and overwhelming, national lockdown could be required again.

One issue with adapting control measures to an evolving pandemic risk is that it could lead to confusion on public messaging and the potential erosion of public trust and support. We have already seen the UK government change its message about going into the office, after encouraging people to go back a month ago.

Public support and compliance with public health advice will be a key factor in determining how successful the pandemic control measures are. As Whitty clearly articulated on Monday:

There is also the question of approach to getting public compliance. The government could appeal to the public’s goodwill and civic-mindedness, to align individual and collective interests. That’s the carrot. It is also introducing a stick approach with fines of up to £10,000 for breaking isolation rules and doubling the fine for not wearing a mask to £200.

However, punitive measures could be counterproductive and have paradoxical effects where some may try to game the system to avoid testing positive. The reasons for this might be completely understandable – there are people whose livelihoods may depend on whether they are in work or isolated. It is important to try to avoid stigmatising any particular group in the community over coronavirus transmission as that could have a negative impact on compliance with these new measures.

We are not out of the woods yet, and there may be more to come.