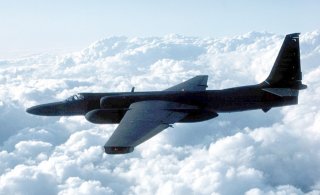 Landing a U-2 on a conventional airstrip is often considered to be one of the most difficult jobs in aviation, so you’d think that landing a U-2 on the pitching deck of an aircraft carrier would be all but impossible. But you’d be wrong.

As any “Dragon Lady” pilot will tell you, nothing about flying the U-2 is normal. Because of the high altitudes the plane flies at and an only partially pressurized cabin, pilots wear pressure suits not unlike those you’d find in early NASA space missions. As you can imagine, wearing a space suit in a cramped cockpit can make moving, working, and even seeing all a lot more challenging.

“First, once that pressure suit is on it makes you feel like you are wearing a sleeping bag, stuffing a football helmet on your head, and ski gloves to make dexterous movements even harder,” wrote Lt. Col. Mikko LaValley of the 99th Reconnaissance Squadron.

“Second, the visibility in the cockpit just got really restricted. The helmet cuts off large portions of the peripheral vision. Without the pressure suit helmet you could see side references and sometimes the wings, with the helmet on, all that is gone.”

Landing a U-2 on a runway is hard enough

To make matters worse for the pilot when landing, the bottom section of the front canopy of the U-2 has been known to fog up on humid days, further limiting visibility. In order to make it feasible to land safely, the pilot in the U-2 has to rely on another rated pilot chasing the aircraft down the runway in a sports car to provide direction as it closes with the ground.

The Air Force uses all sorts of cars for the job, from Camaros to Audis, just as long as they can keep pace with a jet-powered spy plane as it comes in for a landing.

“That car has to be able to accelerate from zero to close to 100 mph in a turn to come into position behind the airplane on the runway,” LaValley explained.

Once the U-2 is about ten feet off the ground, the pilot in the chase car, referred to as the “Mobil Officer,” has to relay the exact position of the aircraft and its far-flung wingtips to the pilot who’s flying nearly blind inside.

“These calls tell the pilot how far off the ground he/she is, whether or not they are line up with center line, if the wings are level, and if any control inputs are needed. On a windy, rough air day, the Mobil can be extremely busy helping the pilot ride a 40,000 pound bicycle down the runway!”

If it’s that hard to bring a U-2 spy plane to safe stop on the controlled surface of an Air Force landing strip, it wouldn’t be unreasonable to assume that it might be impossible to put the capably-but-finicky Dragon Lady on the U.S. Navy’s flat tops. But like so many defense programs throughout the Cold War, seeming impossible was never really seen as a valid reason not to make something work. In fact, the U-2 has flown off America’s carriers on more than one occasion.

Why try to fly the U-2 from an aircraft carrier?

The U-2’s original fuel range of around 3,000 miles gave it the ability to cover a ton of ground, but not enough to operate from American-based airstrips when keeping tabs on far-flung opponents in places like the Soviet Union. Instead, U-2s often operated from airstrips in foreign nations, with on-the-record flights departing from Cyprus, France, India, Pakistan, Thailand, South Korea and more. But the CIA knew this reliance on the goodwill of foreign partners was a strategic shortcoming, and they started looking for alternatives as early as 1957, just a few years after the U-2 first entered service for the intelligence agency.

Then, in 1960, the need for an alternative to foreign airstrips became much more pressing. On May 1 of that year, a U-2 spy plane flown by CIA pilot Gary Powers was shot down by a Soviet SA-2 high-altitude surface-to-air missile. It marked the end of the U.S. being able to defeat Soviet defenses with altitude alone, saw Powers captured and placed in prison for two years, and in the moment, was a significant setback for American foreign policy. Powers’ U-2 had taken off from an airstrip in Pakistan’s capital city of Peshawar, and in the aftermath of the incident, relations between Pakistan and the U.S. soured considerably. Further diplomatic and political fallout reverberated around the world, from Washington D.C. to Tokyo.

If finding an alternative to foreign airstrips seemed worthwhile before, it seemed essential after 1960.

1963 was a red-letter year for the Navy’s flat tops and for famed aviation firm Lockheed. In October of that year, then Lieutenant James Flatley III would make history successfully landing and taking off from the deck of the USS Forrestal multiple times in an absolutely massive C-130 Hercules. Flatley and his crew proved the Lockheed cargo planes could be used to resupply carriers at sea, though the challenge of doing so proved too great for the Navy’s interests at the time. You can learn more about this incredible initiative in our full feature about it here or watch our YouTube video about it below.

Months before, the CIA had approached Lockheed’s legendary engineer Kelly Johnson to see if he thought the U-2 he designed could manage flight operations from an aircraft carrier. Despite how challenging the plane could be to operate, Johnson was confident the airframe could do the trick with just a few modifications; chief among them were adding hardier landing gear and an arresting hook to capture the steel cables traditionally used to slow and stop aircraft aboard carriers.

Confident that the effort was possible, Lt. General Marshall S. Carter, serving as Deputy Director of the CIA, assigned Assistant Director of the Office of Special Activities (OSA), Colonel Jack Ledford, to assess its feasibility. Ledford, in turn, placed his deputy, James A. Cunningham, at the head of a joint team comprised of representatives from the CIA, the office of the Chief of Naval Operations, and Lockheed, tasking them with identifying any measures needed to bring the concept to fruition.

As a part of this effort, declassified CIA documents reveal, Cunningham’s team worked out issues ranging from how to get the large aircraft onto the ship, how to move it around the carrier deck, and how to keep classified CIA U-2 operations a secret when operating from a crowded aircraft carrier.

The first of those issues were both solved by Lockheed, who provided a specialized fuselage sling for loading and unloading the aircraft, as well as a fuselage cart dubbed the “Lowboy” for positioning the U-2 on the deck of the ship. As far as keeping things a secret, Carter aimed to present U-2 flights as anything but reconnaissance missions over contested airspace, citing previous cover stories the CIA had worked out with NACA (the predecessor to NASA) for similar flights as inspiration.

“A clear and plausible cover story, stoutly maintained by responsible persons concerned and supported by the IDEALIST Detachment aboard the carrier, can probably preserve the fiction of innocuous use of the U-2 for considerable time,” Cunningham wrote in his report.

“This story will require precise and unequivocal attention to every detail.”

On July 23, 1963, General Carter, armed with Cunningham’s recommendations, agreed to pull the trigger on White Tail, giving Lockheed the go-ahead to begin modifications on two of the CIA’s existing spy planes, as well as directing the OSA to make arrangements to get some of the CIA’s U-2 pilots trained for aircraft carrier operations. The CIA and the Navy were now nearly convinced the U-2 could fly from the Navy’s flat tops, and it was quickly coming time to prove it.

On the night of August 1, 1963, a team from the Navy, CIA, and Lockheed secretly loaded a U-2A onto the flight deck of the USS Kitty Hawk, moored in the San Diego harbor. The team and crew there to support its flight were given space to work under either the designation “Lockheed employees” or “ONR Staff,” for the Office of Naval Research, to hide the presence of America’s foreign intelligence service.

The following morning, the Kitty Hawk’s commander, Capt. Horace Epes, addressed the presence of the strange aircraft and the need for secrecy among the crew as the carrier steamed out to sea.

“In this regard it is important that there be no discussion or disclosures of this test to unauthorized persons. This means anyone who is not aboard today.”

On August 5th, it was time for the CIA and Lockheed to put their spy plane to the test. Unlike the flight suits common to the Kitty Hawk’s flight deck, Lockheed test pilot Bob Schumacher emerged from the depths of the ship wearing the U-2’s signature pressure suit, looking more like he was preparing for a deep dive in a submersible craft than a history-making flight. Once he was cleared for takeoff, Schumacher throttled up and let the incredible lift provided by the spy plane’s 103’ wingspan do what it did best. In just 321 feet, the U-2 left the deck of the Kitty Hawk and proved that you could deploy it from an aircraft carrier.