Undersea Drones are Taking Navy Submarines to the Next Level 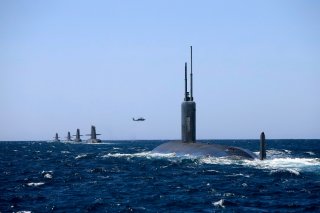 Here's What You Need to Remember: From a tactical circumstance, given that attack submarines and nuclear-armed ballistic missile submarines are likely to conduct large amounts of clandestine patrols, it seems as though an ability to avoid having to surface would bring an extraordinary operational advantage.

Submarine commanders and weapons developers explain that UUV undersea functionality is dependent upon limited battery power and would therefore be further enabled by an ability to “process the data at the source of the sensor” to distinguish and transmit only the most critical information needed by human decision-makers.

“That’s the concept, how do you get all of that information back to a human to analyze. Maybe you don’t want to do that? Maybe you want to allow the UUV to do some initial analysis and make some modifications to its behavior autonomously?” Alan Lytle, Vice President of Strategy & Mission Solutions, Maritime/Land Systems & Sensors division, Northrop Grumman, told The National Interest in an interview.

Organizing and optimizing information at the source, Lytle says, requires less power and makes real-time undersea transmission more effective, something which might remove the need to have a forward-operating undersea drone gather data, which can only then be analyzed upon return to the host platform to be downloaded.

“You significantly improve the mission effectiveness of the UUV if you can process data at the source of the sensor, the power and bandwidth required to send back key critical information is significantly lower,” Lytle explained.

This is where AI comes in, as Northrop Grumman developers are working to develop and refine advanced algorithms able to take in “gathered” information, perform analytics and make determinations regarding moments of relevance or significance to commanders. Lytle’s point about forward-operating sensing and computing applies here, as AI-enabled computer systems could take in acoustic or optical sensor data, bounce it instantly against a vast database to make identifications, draw comparisons and perform analysis at the point of collection so as to streamline data transmission and selectively feed the information most crucial to human decision-makers.

Northrop Grumman’s sensing and AI-related computing efforts in this capacity seem to align with Chief of Naval Operations Michael Gilday’s 2021 NAVPLAN, given that his text makes reference to ongoing work to deploy resilient systems able to “operate with infrequent human interaction.”

“Through analysis, simulations, prototyping, and demonstrations, we will systematically field and operate systems that possess the endurance and resilience to operate with infrequent human interaction,” Gilday writes.

“With our latest systems, you can get down to less than one-inch resolution. It is the difference between being able to discern a World War II aircraft that crashed into the sea bed, or see much more precisely such that submarine personnel could view bullet holes in the fuselage that must have caused it to be shot down,” Lytle said.

From a tactical circumstance, given that attack submarines and nuclear-armed ballistic missile submarines are likely to conduct large amounts of clandestine patrols, it seems as though an ability to avoid having to surface would bring an extraordinary operational advantage. This is particularly critical given that nuclear-armed submarines certainly can’t risk giving up their position. Additionally, attack submarines are increasingly being developed for undersea ISR missions as they can more effectively access areas along enemy coastlines, where more detectable surface ships might be less effective. As part of this operational equation, Virginia-class attack submarines continue to receive cutting-edge upgrades adding new quieting technologies making them much harder to detect.

“A large part of success in the undersea theater is the deterrence value. There is a tremendous conventional deterrence value, because an enemy does not know where the submarine is or know where the unmanned underwater system is... and if you don’t know exactly where it is, you have to search this massive swath of ocean. What we are trying to enable is an operational circumstance wherein the boat never has to come to periscope depth,” Lytle says.