Undersea Rivalry: How These Submarines Re-shaped the Future of Warfare 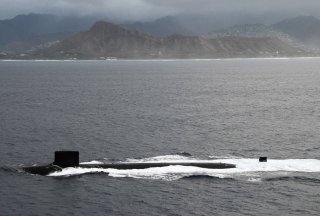 Here’s What You Need to Remember: The United States Navy’s submarine force emerged from the Cold War as the undisputed masters of the undersea realm. The elite, all-nuclear submarine force watched as its Soviet submarine force rivals rusted away pierside, the newly founded Russian Federation unable to maintain them.

After more than twenty years of American submarine supremacy, a new challenger has arisen from the deep. Slightly familiar and almost two decades in the making, it’s an unusual challenge to U.S. naval superiority, but nevertheless one with a long, lethal pedigree. How does this new old upstart, Russia’s Yasen-class submarine, compare with the new backbone of the U.S. submarine force, the Virginia-class?

The Yasen-class of submarines was conceived as early as the mid-1980s by the Malakhit Central Design Bureau, one of the Soviet Union’s three main submarine bureaus. Construction of the first submarine, Severodvinsk, began in 1993 in Russia at the Sevmash Shipyards, but lack of funding delayed completion for more than a decade. Severodvinsk was finally launched in 2010, and commissioned into the fleet in 2013.

The Yasen-class measures 390 feet long and displaces 13,800 tons. It has a crew of just ninety, far fewer than its American equivalents, suggesting a high level of automation is built into the submarine. In shape, it resembles the earlier Akula-class, but much longer behind the conning tower and a hump to accommodate vertical launch tubes. According to the authoritative Combat Fleets of the World, Severodvinsk has a OK-650KPM two-hundred-megawatt nuclear reactor, good for the life of the boat, which drives it to speeds of up to sixteen knots surfaced and thirty-one knots submerged. Other reports peg it slightly faster, at thirty-five knots. It can run quiet underwater at twenty knots.

Armament for the submarines consists of four standard-diameter 5,333-millimeter torpedo tubes and four 650-millimeter torpedo tubes. The torpedo tubes can accommodate homing torpedoes and 3M54 Klub missiles, which are available in both anti-ship, land attack and antisubmarine versions. For even more firepower, the Yasen boats are each equipped with twenty-four vertical launch missile tubes behind the conning tower, each capable of carrying P-800 Oniks ramjet-powered supersonic antiship missiles.

The Virginia-class submarines were conceived as an affordable follow-on to the short-lived Seawolf-class, which, although extremely capable, were also extremely expensive. In that sense, they have been highly successful, and Virginias are gradually becoming the mainstay of the U.S. Navy’s submarine force.

At 377 feet, the Virginias are only thirteen feet shorter than the Yasen-class but displace only half as much water. They have crews of 113, and are powered by one General Electric SG9 nuclear reactor, driving a propulsor/pump-jet instead of a propeller. Speeds are reportedly twenty-five knots on the surface and thirty-five knots underwater, and the submarines are reportedly as quiet at twenty-five knots as the Los Angeles-class is alongside the pier.

Like its Russian counterpart, Virginia’s main sonar is a spherical, bow-mounted type. However, starting with the Block III series of submarines, the BQQ-10 sonar is replaced with the U-shaped Large Aperture Bow sonar. Complementing them are arrays on the port and starboard flanks, also known as Light Weight Wide Aperture Arrays, comprising two banks of three fiber-optic acoustic sensors. LWWAA is particularly attuned to detecting diesel-electric submarines. Rearward detection is covered by the TB-29(A) towed passive array. Finally, a high-frequency sonar array mounted on the sail and chin allows a Virginia to detect and avoid sea mines.

The Virginia-class has only four 533-millimeter torpedo tubes, capable of firing the Mk.48 Advanced Capability (ADCAP) heavyweight homing torpedo for use against surface ships and submarines and the UGM-84 Sub-Harpoon antiship missile. Early versions of the class carried twelve Tomahawk land-attack missiles in vertical launch tubes, replaced in Block III by two-cylinder launchers carrying the same number of missiles. Block V Virginias will expand the number of launchers to carry up to forty Tomahawks per submarine.

In terms of weapons, the two sides are fairly evenly matched, although Severodvinsk has the antisubmarine version of the Klub missile, allowing the Russian ship to quickly engage enemy submarines with a missile-delivered lightweight torpedo, much like the retired American SUBROC system.

The Virginia-class is quieter and has a better sonar rig than its Russian opponent. In the world of submarine warfare, that’s an unbeatable combination. It can move and detect in ways that would give away Severodvinsk. One thing to be said for Severodvinsk is that it is more capable of quickly responding to a sudden target opportunity via her supersonic Klub ASW missiles. As for near-term prospects, the usability of the Virginia’s sonar improves on a regular basis via software updates. Severodvinsk may not be able to update its sonar suite, and making the Russian submarines quieter may not be easily implemented. Overall, the edge has to be given to the Virginia-class.

In the long run, the rivalry between the two submarines will likely see the inclusion of unmanned underwater vehicles and a host of other new technologies. The United States has pursued submarine warfare halfheartedly since the end of the Cold War, and even less so since 9/11. As the United States turns its full attention back to big power warfare and submarine warfare, in particular, American submarines will likely once again outsail their Russian rivals.