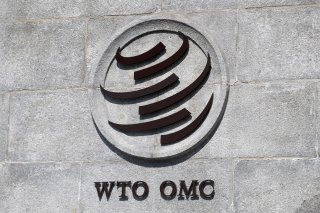 The World Trade Organization (WTO) has been without a boss—the Director General—since September, when Roberto Azevêdo stepped down from the post, one year before the end of his mandate. Since then, the 164 members that make up the organization have been discussing who his replacement will be. There were 8 candidates in the running, and now we are down to 2: South Korea’s Yoo Myung‐​hee and Nigeria’s Ngozi Okonjo‐​Iweala.

WTO members appoint the Director‐​General by consensus, and consensus has been growing around the candidacy of Okonjo‐​Iweala, a former finance minister and World Bank managing director. But in discussions today in Geneva, the United States signaled that it would not support her candidacy. The United States has already made the WTO’s appeals court non‐​functional by blocking the appointment of any new judges, making it impossible to hear appeals. By threatening to veto the appointment of a new Director‐​General, the United States only amplifies the message that trade policy watchers have long known—they are not interested in reform, but rather just want to undo the WTO.

That there is some drama over the nomination of a Director‐​General is not surprising, given the fact that it is a position that serves a number of important roles, including the management of the day to day operations in Geneva, and as an honest broker between the WTO’s 164 members. The value of the Director‐​General is in setting the tone for the organization, and perhaps in a more limited way, influencing the direction of the organization as well, though traditionally, the latter has not really been the case. So while the WTO Director‐​General does not play a role in policymaking, she can serve a critical role in facilitating discussions and getting negotiations across the finish line.

Now, more than ever, the WTO needs direction. The WTO has only concluded one multilateral deal since its founding but has not completed a comprehensive trade round since then. This is not a failure of the institution, but rather a failure of its membership. The political will to conclude ambitious multilateral agreements died with the Doha Round, which never came to fruition.

Part of the reason for this were old issues coming to the fore, a lot of which have to do with the level of commitments countries signed up for when the WTO was founded, including the challenge of developing country status. But these issues will only be resolved if members can be brought to the table to discuss them. Critically, negotiations on harmful fisheries subsidies, which could set an important framework for how to tackle these challenges, are continuing, but are far behind schedule. Having a Director‐​General in place, particularly from a developing country, would go a long way in helping to facilitate and rally a final compromise to achieve a conclusion to these talks.

There is an argument to be made for a bolder Director‐​General to help breathe new life into the WTO. Now, Azevêdo has done a good job, notably helping to conclude the Trade Facilitation Agreement, but we may need a different type of Director‐​General to address the three big challenges that escaped his grasp—revitalizing negotiations, the monitoring function, and dispute settlement. If progress is to be made on these issues and the broader WTO reform agenda the United States is pushing for, then a Director‐​General needs to be in place.

Bloomberg’s Bryce Baschuk reports that sources close to U.S. Trade Representative Robert Ligthizer “say he views Okonjo‐​Iweala as being too close to pro‐​trade internationalists in Washington like Robert Zoellick, a former USTR who worked with Okonjo‐​Iweala when he was president of the World Bank,” even though she also holds U.S. citizenship. (Zoellick has been particularly critical of Trump’s trade policy). Lighthizer’s disdain for the WTO is well documented, as well as his protectionist views, which have not only failed to live up to his promise of manufacturing revival, but have been disproportionately shouldered by U.S. consumers. Nominating someone to the Director-General’s post that not only understands the benefits of trade and the costs of protectionism works against the policies Lighthizer has pushed for as USTR.

Furthermore, that the U.S. supports a candidate who is highly unlikely to ever garner support from China also raises suspicion that the threat of a veto is simply exercised to enhance tension in the organization. If the true aim is to sink a compromise in the first place, it makes sense that the United States would support the candidate that could never garner consensus. It is a bold strategy, but entirely unsurprising given the last four years of disastrous trade policy, which, at every opportunity, has sought to weaken decades of U.S. diplomacy and the rules‐​based trading system it helped to create.

The current stalemate can still be overcome, however, as the final meeting to decide the next Director‐​General will take place on November 9th, just a few days after the U.S. presidential election. If President Trump is re‐​elected, we can expect the United States to dig in its heels and follow through on the veto threat. If Trump loses, however, WTO members may have to wait until January 20, 2021, to resume talks on the new Director‐​General. But the current discussions reveal that even as other WTO members have been working hard to address U.S. concerns, the United States does not seem interested in a solution. It already took out the WTO’s highest court. Now it aims to ensure that it will have no leader.