Is the United States Military Sleeping on the Bullpup Rifle? 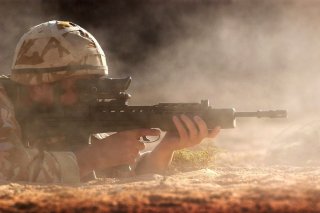 Here’s What You Need to Remember: Bullpup service rifles are more than a simple fad.

You can learn a lot about the differences in national cultures by looking at the service rifles they issue their troops. In some ways, different countries, continents, and cultures take turns swapping in advancements in small arms technology. The United States has led the way with peep sights and semi-automatic battle rifles. Large parts of western Europe lead the way with general issue optics. Germany started the assault rifle craze, but Russia pushed it ahead.

As a result, it sometimes takes time for new and improved elements of weapon design to become ubiquitous around the world. But with that in mind, one type of firearm that has quickly become prevalent across large parts of the world in recent years is the bullpup rifle.

Yet, in North America, the bullpup never really caught on. The U.K. has the SA-80 series of rifles. France has the FAMAS. Austria, Ireland, and Australia love the Steyr AUG. And China, Israel, Singapore, and Croatia all have domestically produced bullpup rifles of their own. Bullpups have this futuristic quality to them, and it’s hard to deny that futurism does have a bit of an appeal.

In fact, there’s an old joke that goes, “Bullpups are the future…and they always will be."

In reality, the first bullpup seemingly dates back to the Curtis rifle of 1866. Then, in 1901, the Thorneycroft carbine saw life. The Thorneycroft was a somewhat practical design that mixed a bolt action 303 British rifle with a bullpup stock. In 1977, the Austrian army broke new ground by adopting a bullpup, specifically the Steyr AUG, as their service rifle that they dubbed the Stg 77.

But what’s the point of the bullpup? Is it really the rifle choice of the future, or is it just another rifle fad that will eventually go the way of the Dodo (or the Advanced Combat Rifle)?

What Is a Bullpup Rifle?

Rifles, shotguns, and even pistols can be bullpups. Albeit, I only know of one traditional pistol that uses a bullpup layout. In the military world, the weapon most commonly used in this configuration is a rifle, as rifles typically benefit most from this sort of design.

The primary benefit of using a bullpup design is that the overall length of the weapon can be much shorter without reducing barrel length. Barrel length can be incredibly important with rifle calibers. For example, the 5.56 caliber round is designed for a 20-inch barrel. Anytime the barrel gets shorter, the rifle loses ballistic capability… But a traditional rifle with a 20-inch barrel, like the M16A4, is quite long, which makes urban warfare (entering and exiting doors, buildings, rooms) more difficult. The longer your weapon, the tougher it is to maneuver in tight spaces.

A bullpup rifle can be extremely short and compact but still retain its barrel length because it places the action behind the trigger. Most bullpups with 16-inch barrels can be the same length as an Mk 18 M4A1 Carbine with a 10.3-inch barrel. Again, smaller rifles work better in close quarter’s combat, in and out of vehicles, and stay out of the way for non-front line troops like artillerymen.

Something like the Israeli Tavor can give you a proper rifle barrel for engagements out to 300 to 500 meters and still be small and maneuverable. An Mk 18’s short 10.3-inch barrel drastically reduces the weapon’s overall capabilities outside of a CQB (Close Quarters Battle) environment. In other words, a bullpup rifle can be shorter than a conventional rifle, allowing for good performance both in close quarters and at longer ranges.

The Benefits and Downsides of a Bullpup

While length is the most critical benefit, there are other considerations. First and foremost, the weight is shifted mostly to the rear in a bullpup rifle. Thus the weight sits against the shoulder. This helps balance the rifle and makes it much easier to hold up for longer periods of time. Additionally, bullpups are much easier to fire one-handed and to even hold one-handed while using the other hand for various tasks, and that matters when you’re spending extended periods of time in a combat zone.

The shorter distance between the action and the butt plate also tends to mitigate muzzle rise. This makes the weapon easier to control, especially when rapid firing or firing full auto. Bullpup infantry automatic rifles have been produced as part of the AUG and SA-80 series rifles, and they make it easy to see the benefits of a bullpup layout.

We can’t get a free lunch, though, and everything that’s much better at one thing is sure to be worse at another. One of the primary downsides to adopting bullpup rifles is the placement of the shooter’s cheek in relation to the action. First, should a catastrophic failure occur, the user’s face is more likely to be injured.

Second, bullpups often eject empty casings out of the right-hand side. This produces a problem for lefties as they tend to take casings to the face. That being said, some do allow you to swap the ejection ports or eject casings downwards.

Another issue is the placement of magazines. Being placed so far rearward makes reloads less intuitive. Slow reloads suck, especially if you are laying down suppressive fire. On top of that, the long linkage required to run from the trigger to the action often creates a rather crappy trigger situation. Though, in recent years companies have produced much better bullpup triggers than in the past.

Are Bullpups Really the Future?

Sure, for some countries. I do believe bullpup service rifles are more than a simple fad. In fact, General Dynamics introduced their own bullpup rifle and infantry automatic rifle in the Army’s Next Generation Squad Weapons, or NGSW, competition. That may have been a fluke in the hunt for America’s next top boomstick, but it could also indicate that Uncle Sam may be warming up to the idea. Plenty of countries seem happy with their bullpups, but it’s also interesting to see a variety of special operations forces turning to Stoner-designed or derivative rifles instead. In other words, they’re sticking with tried and true approaches to traditional rifle design, making changes and modifications to what’s proven to work.

To date, the United States has leaned toward the latter approach as well, but the times, they are a’changin’.

Will the United States ever adopt a bullpup rifle? I don’t see it happening, but the world is a crazy place, and I’ll never say never.