The U.S. Air Force Is Building Artificial Intelligence Bombs for the F-16 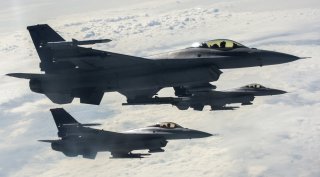 Here's What to Remember: The collaborative weapons experiment is showing great promise.

Two Air Force F-16 jets fired Small Diameter Bombs were able to share threat data with one another while in flight to a target using an emerging kind of collaborative weapons coordination, enabling the bombs to adjust trajectory and change course in response to identifying enemy guidance jamming signals.

The developmental program, called Golden Horde, continues to show great promise with an ability to use software-defined radio signals to exchange data in-flight enabled by computer processors preloaded with advanced algorithms. While the test earlier this year was successful in terms of an ability to demonstrate initial capabilities for collaborative in-flight weapons targeting, Air Force Research Laboratory Commander Brig. Gen. Heather Pringle explained that there was still much to learn and refine regarding the networking of weapons.

There are a lot of questions that have yet to be answered about networking. For example, what types of radio technologies are going to work best, depending on the distance of flight? Also, there are still questions about how to best build the algorithms to work together, Pringle said.

As is often the case with highly challenged and technologically complex modern warfare, gathering massive amounts of information to share in real-time is of great value. Still, the data needs to be organized, distilled, analyzed and properly transmitted in small, useful increments. This is part of the challenge, it appears when it comes to architecting sensor-enabled weapons to gather and share data in route to an attack target. After all, what may be of greatest significance is not simply that information can be shared, but rather what kind of information and its relative degree of pressing relevance.

These weapons should share the same information, Pringle said. In the past, the Air Force looked at playbooks in an effort to get to more advanced iterations of artificial intelligence and autonomy so that they’re able to make decisions on the fly. What type of information is being shared? Is it being shared? What’s the minimum amount? Pringle said that she was curious about the maximum outcome and all those iterations in between.

At the same time, the collaborative weapons experiment is showing great promise, perhaps in large measure because artificial-intelligence-capable algorithms can be integrated into small form factors such as the Small Diameter Bombs that were used. Advanced sensors built into the weapons themselves can surveil the surrounding combat environment and, using artificial intelligence, bounce specific incoming data off of a vast database of known, cataloged information to make instant identifications, perform analyses and recommend optimal courses of action. For instance, perhaps one sensor built into one Small Diameter Bomb picks up the electronic signature of an enemy jammer and is then able to transmit organized and identified data to the other bomb in flight, thus enabling it to change course and or adjust its flight trajectory and targeting accordingly.

I think it’s good to have a digital ecosystem where we have the best of breed in terms of networked collaborative autonomous technologies, whether they’re algorithms or radios, Pringle said. The idea is that different technologies can have an environment where they can, you know, kind of have a competition and look at which networking technologies will fare better under various circumstances, Pringle explained.