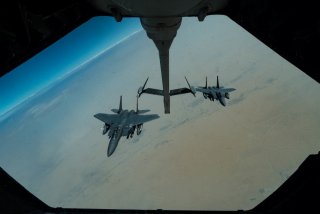 Key point: There are several flaws that plague the current refueling system.

Sleek warbirds like the F-15 Eagle and the F/A-18 Super Hornet may attract the most attention, but these aircraft can only reach distant war zones and stay active above them for useful amounts of time thanks to a veritable horde of tanker planes. In fact, the U.S. military’s air-refueling capacity is one of its unique force multipliers—while tankers in most air forces around the globe number in the single digits to the low dozens for China and Russia, the United States operates over four hundred.

Afterwards, Boeing proposed a revised KC-767 tanker—the KC-46—but it lost in a competition versus the Airbus A330MRTT in 2008. However, the Government Accountability Office found that the competition had been mishandled; when it was held a second time, Boeing’s design won out.