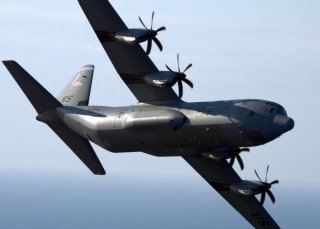 Here’s What You Need to Remember: The thinking is to first migrate laser weapons to larger aircraft such as C-130 Cargo planes as they fly airframes more likely to succeed in accommodating the on-board power and cooling systems needed to fire successfully. As mobile power and thermal management technology matures, the thinking goes, high powered lasers can arm smaller, high-speed fighter jets.

The Air Force Research Laboratory is accelerating its Science and Technology 2030 Strategy to fast-track innovations to war for the purpose of deploying a new generation of weapons, computing and sensing to future warfare environments.

The AFRL’s S&T 2030 Strategy, in existence for several years now, seeks to quickly connect promising weapons and technologies with the operational combat community and programmatic acquisition process to succeed in leveraging impactful solutions on a faster time frame.

It would make sense that lasers and AI would figure prominently, given that the Air Force is fast approaching a point at which it might be able to fire precision-guided laser weapons from drones or even fighter jets. The challenge, scientists explain, is to generate the requisite amount of exportable electrical power in a small enough form factor to sustain a powerful aircraft-fired laser. Thermal management is also crucial when it comes to lasers as temperature needs to be properly regulated and controlled to ensure successful operation of the weapon.

Lasers are a useful example because they represent what could be referred to as an interesting threshold between “in-development” weapons systems and those which are arriving or have arrived. Lasers are evolving along a certain significant trajectory, because many are already deployed and operational, yet newer kinds of more impactful applications are fast emerging at the same time.

The Army, for instance, wants to engineer laser weapons strong and compact enough to integrate onto a mobile vehicle for expeditionary operations on the move. The service is already seeking to add more kilowatts to its Stryker-mounted laser weapon, refine drone-intercepting lasers for base defense and even explore laser optics for dismounted soldiers maneuvering to contact with an enemy.

The Air Force Research Laboratory has for many years now been ground-testing and refining laser weapons systems, in preparation for arming aircraft and eventually fighter jets.

The thinking is to first migrate laser weapons to larger aircraft such as C-130 Cargo planes as they fly airframes more likely to succeed in accommodating the on-board power and cooling systems needed to fire successfully. As mobile power and thermal management technology matures, the thinking goes, high powered lasers can arm smaller, high-speed fighter jets. The Navy already deploys laser weapons on ships. In fact, years ago, an Office of Naval Research-developed system called the Laser Weapons System was deployed on the USS Ponce, a development which continues to pave the way forward toward more powerful and extensive laser weapons applications aboard ships.

Along these lines, the Navy is already working with the Missile Defense Agency to “power scale” lasers with the intent of possibly even using them for ballistic missile defense. Weapons developers say it is by no means beyond the realm of the possible for laser weapons to reach into space to counter threats traveling beyond the earth’s atmosphere.