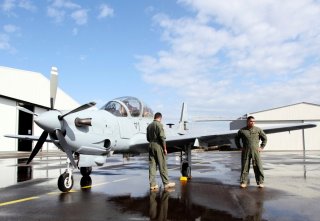 Here's What You Need to Remember: The LAA procurement is a test of that service’s commitment to acquisition reform. It is the proverbial poster child for acquisition reform. The program seeks to provide a new capability rapidly, based on acquiring non-developmental platforms and using experimentation to reduce risk and better inform decisionmakers.

Later this month, the U.S. Air Force says that it will release the long-anticipated Request for Proposal (RFP) for a Light Attack Aircraft (LAA). Although it will be a relatively small program in budgetary terms, it could have profound implications for the way the air force supports the new National Defense Strategy, grows its number of combat squadrons, engages with allies and partners, and reforms a cumbersome and expensive acquisition system.

One impetus for the LAA program is the well-established need to provide less costly air support for low-intensity counter-insurgency and counterterrorism operations such as in Afghanistan and eastern Syria. Currently, the U.S. military employs a variety of high-end warplanes to conduct close air support missions in these conflicts, including B-1s, F-15s, F-16s and F-18s, A-10s and MQ-9 Reaper drones. While highly effective, these platforms are expensive to sustain. Their use in low-intensity missions also detracts from the air force’s ability to prepare for the potential threat of high-intensity conflict. Facing a sustainment bow wave in the next five years as existing fighter fleets continue to age and new platforms place additional burdens on the maintenance and supply systems, it is imperative that the air force find ways of lowering its operating costs.

An LAA would enable partner countries to develop effective indigenous close air support capabilities. This would reduce the burden on the U.S. Air Force. Also, it would help create an informal coalition of partner air forces able to engage in exchanges in the counter-insurgency fight and simultaneously share airborne intelligence amongst themselves and with the United States. Air Force Chief of Staff General David Goldfein explained part of the rationale for an air force procurement of an LAA thusly:

“‘What I hear over and over again from various air chiefs … who perhaps are not able to get into fourth … or fifth generation aircraft’ is that they want to participate in air campaigns and the light aircraft would allow them to ‘buy into [a] system … that can enhance [the] alignment of effort.’”

The air force has already demonstrated the viability of this strategy in Afghanistan. For a number of years, the U.S. Air Force has been working to provide the Afghan Air Force (AAF) with a light attack/reconnaissance capability built around a variant of the Embraer Super Tucano, the A-29. Twenty-two of twenty-six planned aircraft have been delivered to date. The program also provided training for Afghan pilot and maintainers.

The Afghan A-29 program has been remarkably successful. Since it began conducting combat operations with the aircraft some two years ago, the AAF has flown their A-29s more than 100,000 hours while steadily improving its overall effectiveness and expanding the range of missions it can perform to include night operations and the employment of laser-guided munitions. It was reported that last year the AAF’s small number of A-29s were conducting one-third of that service’s close air support missions, dropping their ordinance with great accuracy and reducing the number of collateral casualties.

The LAA procurement is a test of that service’s commitment to acquisition reform. It is the proverbial poster child for acquisition reform. The program seeks to provide a new capability rapidly, based on acquiring non-developmental platforms and using experimentation to reduce risk and better inform decisionmakers. As currently defined, the LAA will not be a massive, decades-long major acquisition program involving years of development and testing. All the preparatory work has been accomplished, including an experiment involving flying two candidate aircraft, an enhanced version of the A-29 and a variant of the venerable T-6 trainer, the AT-6. Instead, at least initially, it will involve the rapid procurement of a relatively small number of platforms, allowing the air force to develop the appropriate tactics, concepts of operations and sustainment protocols.

As the date for the release of the LAA RFP approaches, the air force has one last chance to better define its requirements for the aircraft. If it has any intention of sending its own pilots or those of its partner air forces into combat in the LAA, then the platform’s combat capability must be the number one requirement. Because its primary role will be in low-intensity conflicts largely involving countries with underdeveloped infrastructure, the ability to operate from and be maintained on austere locations should be requirement number two. Overall sustainment costs, not just the unit price of the aircraft, should be a third area of concern.

The air force has repeatedly asserted that the LAA procurement will be a best-value competition. But unless it defines those characteristics and capabilities which it values, the competition is in danger of degenerating into a lowest-price shootout that could place air force pilots at risk and undermine its credibility in foreign markets.

At the end of the day, air force leadership needs to trust those instincts that led it to initially propose the rapid acquisition of an LAA. The wear-and-tear on high-end platforms must be reduced while maintaining a capability to provide close air support in low-intensity conflicts. Building a network of partner air forces flying the same platforms and exchanging intelligence rests on a decision by the U.S. Air Force to acquire and operate some number of the same platform. Simply put, if we fly it they will come.

Now is the time and the LAA procurement is the right program for the U.S. Air Force to demonstrate that it can be an agile, smart buyer, able to cut years off of its heretofore ponderous acquisition timelines. It should rapidly acquire enough LAAs, say fifty initially, to allow it to understand how to organize, train, equip and employ such a force (particularly in the context of the service’s larger, evolving force structure). Then the air force should revisit the future of the program after it has had time to employ this new capability in real-world situations.