A U.S. Air Force Without the B-52 Would Be Unrecognizable 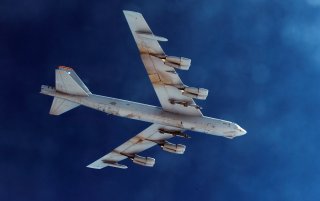 Here's What You Need to Know:  The cancellation of the B-52 would have left the USAF in a dire position. The B-36 fleet had been obsolete before the first aircraft left the factory, elaborate fixes such as attaching short-range fighters to the bomber’s wings notwithstanding. The Soviet interceptor fleet would have devoured the Peacemaker alive, one reason why Curtis Lemay had declined to deploy the bomber over Korea.

The vanishing of the B-52 may have produced an even more dramatic shift towards tactical aviation during the Rise of the Fighter Generals in the wake of Vietnam. Indeed, the prospect of B-60s or B-70s (or both in combination) conducting World War II-style formation bombing over Hanoi during Linebacker II might have been so absurd that even the most committed bomber advocates would simply have given up. To be sure, the rise of net assessment in the 1970s gave new life to the idea of a strategic bomber force, if only as a bluff, and it’s possible that the bomber lobby would have remained vital enough to bring the B-1B into existence (or perhaps even its abortive sister the B-1A), but much of the hole left by the B-52 would probably have been filled with non-bomber capabilities, either on the missile or the fighter side.