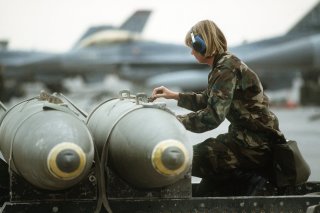 Here's What You Need to Know: Between August 2014 and September 2020, the Combined Joint Task Force-Operation Inherent Resolve (CJTF-OIR) had launched almost 35,000 airstrikes against the terrorist group in Iraq and Syria.

Although the Islamic State (ISIS) has ceased to pose an existential threat in the Middle East, the US-led coalition continues to pound ISIS targets with airstrikes.

Between August 2014 and September 2020, the Combined Joint Task Force-Operation Inherent Resolve (CJTF-OIR) had launched almost 35,000 airstrikes against the terrorist group in Iraq and Syria.

But the pressure comes from all fronts. According to CJTF-OIR, in December, Coalition forces conducted 55 ground operations against ISIS both in Iraq and Syria, killing or detaining 31 medium- and low-level leaders and 56 fighters.

Expeditionary Air Refueling Squadron KC-135 Stratotanker during a mission in the U.S. Central Command area of operations, Oct. 25, 2019. The Raptor plays a key role in U.S. Air Forces Central Command operations by maintaining constant readiness in support of air operations, providing deterrence and stability, and bolstering the mission efforts of coalition partners. F-22s have been participating in the airstrikes against ISIS (U.S. Air Force photo by Master Sgt. Russ Scalf).

ISIS emerged in a big way between 2014 and 2015. In the span of only few months, the terrorist group took the international community by surprise with a military campaign that took Iraqi city after Iraqi city and even threatened the country’s capital Baghdad. Major cities that fell to ISIS included Raqqa, Mosul, Fallujah and Ramadi. At that time, ISIS could field approximately 40,000 fighters, or about four divisions, and controlled almost 43 thousand square miles.

It was a combination of special operations working with partner forces and airstrikes that defeated ISIS.

According to CJTF-OIR, the Coalition and its partners have liberated close to 43,000 square miles of territory and 7.7 million people from ISIS.

Tidbits about the campaign against ISIS still surface. In September, Sergeant Major Thomas Patrick Payne, a Delta Force operator, received the Medal of Honor for his actions during a daring hostage rescue in 2015. During the operation, he had repeatedly run into a burning building to break open a fortified prison door before the building collapsed. Delta Force ended up rescuing 78 hostages that night, making it the largest contested hostage-rescue mission in U.S. special operations history.

Per the current troop drawdown plans for Iraq and Syria, by the end of January, there will be 2,500 US troops in the two countries. The Iraqi Security Forces will shoulder most of the burden that will be created by troop withdrawal.

As CJTF-OIR representatives keep reiterating, the Coalition is committed to the enduring defeat of the terrorist organization and to improvement of conditions in the region that would facility peace and stability.

But don’t be mistaken and think that ISIS, or violent extremism, is eradicated. Currently there are thousands of men, women, and children in detention camps across Iraq and Syria. They were either ISIS supporters or family members.

“Unless we find a way to repatriate, to deradicalize, to bring these people that are at grave risk in these camps back — preferably to their nations that they came from or to stay in Syria where appropriate, but with some form of deradicalization — we’re buying ourselves a strategic problem 10 years down the road, 15 years down the road,” Marine General Kenneth F. McKenzie Jr., the Commander of Central Command, had said in a press interview.

“Young people grow up, and we’re going to see them again, unless we can find a way to turn them in a way that will make them productive members of society.”

Some of these people have come from abroad to fight, usually from Europe. To complicate matters, their countries are racing to strip them of their citizenship, in an essence making them people without a country.