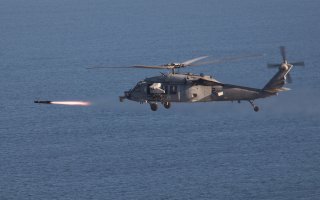 Here's What You Need to Know: Initially conceived of as a kind of counterinsurgency weapon, the Hellfire could also become useful in a great power war.

An Apache helicopter-fired Hellfire missile can typically hit ranges as far as eight kilometers, a targeting scenario which opens up significant opportunities for stand-off air attack. For instance, as was the case in the Gulf War in the early 1990s, Apache helicopters can hover for great periods of time, rely upon its advanced infrared targeting cameras and fire precision-guided Hellfire missiles at enemy tanks, trucks and even ground forces to a degree.

This kind of targeting range has become particularly helpful in more recent years due to the successful advent of manned-unmanned targeting wherein video feeds from nearby drones can be fed into Apache cockpits, without needing to route through a ground control station. This massively expands target options for helicopter crews and is a technology which continues to advance rapidly.

Now, given the urgency of developing new weapons with even greater ranges and precision, the Army is making progress looking at new air fired weapons and pursuing an effort to “extend the range of our current Hellfires,” Gen. John Murray, Commander of Army Futures Command, told The National Interest in an interview.

This prospect introduces a significant new combat attack possibility as it helps extend some of the new longer-range ground fire technologies into the air for additional air-ground coordination. For instance, the Army can already fire 155mm artillery as far as 70km and is making fast-progress with its new ground-fired Precision Strike Missile.

The Hellfire missile itself has evolved considerably over the years as it is now ground-fired from multi-mission launchers to destroy enemy drones and aircraft. If fact, it can now be launched from Stryker vehicles as part of the Army’s Short Range Air Defense program and even arms Navy Littoral Combat Ships, among other things. The weapon itself has been upgraded as well in recent years, to include incorporating a new “seeker” and fragmenting metal sleeve casing.

First introduced years ago, the Hellfire operates with an inertial measurement units guidance system which allows it to look for a laser spot with a wider arc. Previous Hellfires had a more limited ability to find a laser-designated target after launch. They were programmed to fly off of the aircraft and follow a high or low trajectory to search for the laser spot. The upgraded Hellfire seeker, as first introduced more than a decade ago, can find laser reflections in a 180-degree arc, much wider than the previous 40-degree arc of earlier Hellfires. Even further modifications to Hellfire targeting and flight trajectory were further developed in later years, to include course correcting 360-degree engagement envelopes.

While primarily a tank-attacking weapon, the Army realized during the wars in Iraq and Afghanistan that it needed an anti-personnel Hellfire variant able to target small groups of insurgents on the move. This led to innovations which created the Augmented High-Explosive Antitank Hellfire II, a standard missile with a metal sleeve added which, upon impact, breaks into thousands of shards and metal fragments to disperse across an wider area. As opposed to the kind of single-point penetrating blast effect of most Hellfires, this variant breaks up small pieces of metal fragmentation as part of its energetics or explosive power to target groups of individual fighter within a specific area such as in a pickup truck or next to a building.

While initially conceived of as a kind of counterinsurgency weapon, the Hellfire with an augmented metal sleeve could also seem useful in a great power war, especially if there was close-quarter battle, urban warfare of target areas with concentrations of enemy troops.