The U.S. Army Almost Brought Camels to the American Southwest 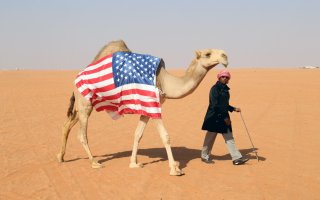 Here's What You Need to Know: Getting the camels to the United States proved less daunting than convincing Congress to undertake the endeavor.

The camel has been called both the “ship of the desert” for its ability to cross arid lands where no other animal could go, but also “a horse designed by committee”—the latter a disparaging term that highlights the fact that the animal appears misshapen. However, the camel actually proves otherwise and is actually highly efficient and well suited to their desert habitat. The animals can run as fast as 40 mph in short bursts or sustain an average speed of 25 mph over great distances.

The camel’s hoofs provide grip and traction on varying soil sediments, but notably can withstand long periods of time without any external source of water. The dromedary camel, which is the most common of the three modern species of camels, can drink as seldom as once every ten days even in extreme heat and can lose up to 30 percent of its body mass from dehydration.

As the American frontier opened in the early 19th century it was still a rugged and untamed land. It was marred by inhospitable terrain and climate, notably in the southwest, which resembled that of the Middle East with vast deserts, mountain peaks and seemingly impassible rivers.

It was therefore not that strange that some American military planners had their own designs on the so-called “horse designed by committee.” The dromedary camel of the Middle East must have seemed ideally suited for use in the much untamed American southwest.

In 1836, Lt. George H. Crosman, United States Army, first suggested to the United States War Department that camels might be just the animal for these harsh conditions. He had served at various posts on the frontier and took part in the Black Hawk War of 1832 before being transferred from the Infantry to the Quartermaster Department.

He submitted an extensive study on the subject of camels to his superiors, and the report noted:

For strength in carrying burdens, for patient endurance of labor, and privation of food, water & rest, and in some respects speed also, the camel and dromedary (as the Arabian camel is called) are unrivaled among animals. The ordinary loads for camels are from seven to nine hundred pounds each, and with these they can travel from thirty to forty miles a day, for many days in succession.  They will go without water, and with but little food, for six or eight days, or it is said even longer.

However, the report was largely ignored by the War Department, which had no interest in importing Arabian camels. Nothing may have come of it, but Crosman rose through the ranks, and as a Major he and another Major Henry C. Wayne of the Quartermaster Department took up the cause anew. In 1847, a new report was submitted to the War Department as well as the United States Congress—and this time it caught the eye of then Senator Jefferson Davis of Mississippi.

Davis, who would of course go on to be the President of the Confederate States of America, was known to be forward thinking when it came to military innovations. As chairman of the Senate Committee on Military Affairs he sought approval for the project, and then in 1853 he was appointed Secretary of War. Davis presented the idea of using military camels in the southwest to President Franklin Pierce.

The terrain and climate of the far frontier was proving more hostile than expected, and horses and mules proved inadequate for the long, dry treks across the arid land. With the support of Davis, Congress finally approved the plan. On March 3, 1855, the United States Congress appropriated $30,000 to important camels for use by the United States military.

Getting the camels to the United States proved less daunting than convincing Congress to undertake the endeavor. In May 1855, Davis appointed Wayne to the task—and the fittingly named U.S. Navy store ship USS Supply, under the command of Lt. Dixon Porter, was provided to transport the camels from the Middle East to the United States. The ship was outfitted with special hatches that included stable areas—and this may have given rise to the name “camel car”—as well as hoists and slings to transport the animals in reasonable comfort for the long transatlantic crossing.

Supply departed New York City in June 1855 for the Mediterranean Sea. Interestingly, there was no set plan by Wayne or Porter as to where exactly to obtain the camels—and instead the expedition made stops in Goletta in modern day Tunisia, Malta, Greece, Turkey, and Egypt. Camels were bought from various markets with what can only be described as mixed “results.” Two of the first three camels, which were acquired in Goletta, were reportedly infected with a form of mange.

The expedition was aided by the arrival of one Gwynne Harris Heap, Porter's brother-in-law, who happened to be familiar with various languages including Greek and Arabic. More importantly Heap knew the customs of the locations the ship visited during its five month voyage and he seemingly helped with the bartering and negotiations.

However, the process was still long and arduous—buying camels it turned out wasn't as easy as Wayne or perhaps even Davis had expected. Yet, in all, the journey proved a success, and thirty-three camels were acquired, including nineteen females and fourteen males. These included nineteen dromedaries with single humps, two Bactrian (double humped camels), nineteen Arabian (a variation of the dromedaries), one Tunis burden, one Arabian calf and one Booghdee camel.

Strict rules were instituted for care, watering and feeding of the animals—and this included that no experiments were to be conducted notably how long a camel could survive without water. Despite these efforts, one male camel did perish on the return voyage as well as one calf born on the trip. Yet, a second calf was also born and survived—bringing the total of thirty-four camels that arrived in Indianola, Texas on May 14, 1856. A second expedition brought the total number of camels to seventy with an average cost of $250 per animal.

The camels weren't the only natives of the region to return to America. As no Americans knew how to ride or train camels the task fell to Hadji Ali, an Ottoman subject of Syrian/Greek parentage, who became the first camel driver ever hired by the U.S. Army. He soon earned the nickname “Hi Jolly” and remained with the camels throughout the program.

All of the animals from the two expeditions were herded to Camp Verde, Texas. Thus began the U.S. military's experiment with camels, and to test the usefulness of camels as pack animals a team of wagons was sent to San Antonio. Wagons drawn by six mules, and carrying 1,800 pounds of oats, took nearly five days to make the trip; while six wagons drawn by six camels were able to carry 3,648 pounds of oats and covered the same distance in just two days. Davis was pleased with the results as the tests proved the effectiveness of the camels.

The animals seemed suited to the terrain of the American southwest—they could cover ground faster, required less water than horses or mules, and ate what scrub and plants were found on the trail. The camels even proved adept at finding watering holes in the arid lands.

The camels' potential was never fully comprehended however. When the American Civil War broke out in 1861, camels were used to carry mail between Fort Mohave in the New Mexico Territory to New San Pedro in California. However, the commanders at the post had been cavalry men and didn't like the idea of camels doing the job horses had done so well.

Meanwhile, Camp Verde fell into Confederate hands and there are reports that the animals were used to some lesser extent to transport baggage. When the Union troops reoccupied Camp Verde there were more than 100 camels in the camp.

While there were considerations to continue the use of camels after the Civil War, there were those who opposed it simply because Davis (who later became the Confederate president) initially supported it. In addition, the U.S. Army had come to rely on horse-and-mule trains, and the soldiers simply didn't have the skills to handle the camels.

Just after the end of the Civil War, the camels sent to California were sold off at around $52 a piece, while those at Camp Verde were sold off at an average of $31 a piece—far lower than the cost the U.S. military paid to acquire the beasts. The sales were all approved by Army's Quartermaster-General, Major General Montgomery Meigs, who hoped camels might fare better with the civilians.

By all accounts the animals lived good lives—many gave rides to children, while others worked as pack animals. The camels were a familiar sight not only in the southwest but as far as British Columbia. Interestingly, the animals were encountered by the likes of Robert E. Lee before the Civil War when he was the temporary commander of the Department of Texas, and later by a young Douglas MacArthur who saw “an old army camel” as a child.