Is the U.S. Army Facing a Slow Decline? 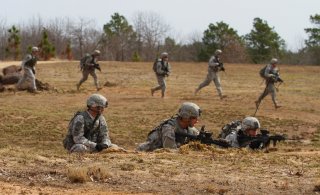 Here's What You Need to Know: A day of reckoning is coming for Army modernization. Defense budgets will not continue to increase, and the resources available for modernization will shrink. At the same time, threats are proliferating, and the Army still must maintain sufficient ready forces to deal with day-to-day demands and surprises such as COVID-19.

For the past four years, the U.S. Army’s modernization campaign has been driving forward at warp speed. Over this period, the Army has stood up a new major command, Army Futures Command. It has kickstarted 31 programs (plus two enabling capabilities) across six modernization priorities, each managed by a Cross-Functional Team (CFT). It has formulated a new operational concept called Multi-Domain Operations. Finally, it has demonstrated the ability to rapidly move programs from concept to initial fielding.

Despite all these successes, Army modernization now faces a day of reckoning. Regardless of who wins the November election, the flow of resources which has undergirded modernization is almost certain to decline. The Army’s leaders will have to conduct serious triage on its portfolios of priority modernization efforts. It will also have to revise its modernization strategy to achieve a better balance of upgrades and new starts.

From the very start, the Army’s modernization effort has been based on lofty goals. According to the 2019 Army Modernization Strategy, the objectives of modernization were to change “how we fight, what we fight with, and who we are.” Regarding fielding new capabilities, the Army did not want just a modernization: it sought a revolution. In the words of one of Army modernization’s principal architects, former Chief of Staff General Mark Milley:

I’m not interested in a linear progression into the future. That will end up in defeat on a future battlefield. If we think that if we just draw a straight line into the future and simply make incremental improvements to current systems, then we're blowing smoke up our collective fourth point of contact . . . What I'm talking about is a significant—call it '10x,' call it 'leap ahead,' all those type of terms—a very significant, radical improvement in current capabilities.

This desire to eschew incremental improvements in favor of “leap ahead” technologies has positively and negatively impacted Army modernization. Positively, it has encouraged the Army to take risks and accept failures in pursuing new capabilities, to be more creative in how it thinks about modernization, and to place big resource bets on the future.

Indeed, in some respects, the Army’s modernization effort has been remarkably successful. AFC is up and running. The Long Range Protected Fires CFT appears on track to deploy both the Extended Range Cannon Artillery (ERCA) and the Precision Strike Missile in the early 2020s. The Air and Missile Defense CFT has received the first of 144 Interim Mobile Short-Range Air Defense (IM-SHORAD) systems. The Soldier Lethality CFT is making great progress on the Integrated Visualization Augmentation System. The recent Project Convergence exercise demonstrated the value of new networking, command and control, and battle management capabilities to integrate and enhance the performance of existing sensors and weapons, including space-based systems and aircraft such as the F-35.

On the negative side, a day of reckoning is coming for Army modernization. Defense budgets will not continue to increase, and the resources available for modernization will shrink. At the same time, threats are proliferating, and the Army still must maintain sufficient ready forces to deal with day-to-day demands and surprises such as COVID-19.

Ultimately, the Army will have to triage its 33 modernization programs. It will not be able to take the traditional approach of carrying all of these by just stretching out the programs. Priority will need to be given to those programs that will have a multiplier effect, not only for Army formations but also for the Joint Force. It is better for the Army to make this call than leave it up to the Secretary of Defense or Congress.

The Army also will have to change its attitude towards upgrades. The desire for a tenfold improvement in capabilities has blinded some within the Army’s hierarchy to the reality that upgrades to existing platforms and systems are both necessary and provide real value.

Since the Army will not be able to modernize everything in the next few years or so, it must focus more attention on upgrades. Upgrades to current systems are critical to the combat effectiveness of the future force. Much of what is in the force today will still be there in 20 years.

Upgrading existing systems is a good thing. The U.S. aerospace and defense industry is adept at upgrading platforms and equipment, not just extending their service lives but improving performance, lethality, survivability and sustainability. An example is the B-52 strategic bomber, which with continuous upgrades, including new engines, will be in service for 100 years. There are new variants of the venerable F-15, F-16 and F/A-18 being acquired by the U.S. military and allies.

The Army has major upgrades underway for both its main battle tank, the M-1 Abrams 2C, and its Paladin self-propelled artillery system, ensuring its relevance for decades to come. The Army’s modernization strategy envisions deploying a new ground combat platform, the Optionally Manned Fighting Vehicle, to operate alongside improved M-1s and Paladins. Long-serving weapons systems such as the Tomahawk, Patriot, and Standard missiles have been adapted to new missions.

The Army’s 31 modernization programs include a number of what could be characterized as upgrades. For example, IM-SHORAD is based on a Stryker wheeled combat vehicle with a new turret that carries an existing gun, missiles and sensors. In the future, a tactical laser may replace the current gun system. The “secret sauce” is the integration of all components into a functioning weapons system. Similarly, the ERCA is derived from the Paladin gun system with a longer barrel, new breach, and more energetic propellants. An upgraded system will address critical capability gaps faster and at lower cost than a new start in both cases. The Armored Multi-Purpose Vehicle, a replacement for the obsolescent M-113 is itself a variant of the Bradley, minus the turret and with enhancements.

What is required is the right mix of new starts and upgrades. In airpower, this means exploiting the unique capabilities of the fifth-generation F-35 to enhance the effectiveness of fourth-generation aircraft. For the Army, this clearly means, at minimum, adding long-range fires, new air vehicles, improved air and missile defenses, and networking/C3 to a force that will include upgraded versions of the M-1, Bradley, Stryker, Patriot, Apache and Blackhawk helicopters, to name just a few, for decades to come.