The U.S. Army Has Huge Plans for the Precision Strike Missile 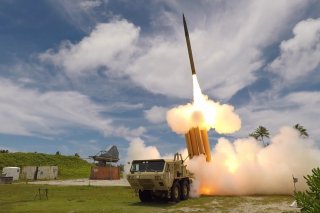 Here’s What You Need to Remember: The most recent missile test at Vandenberg Air Force Base shows that the missile can hit ranges farther than four hundred kilometers, according to a Lockheed Martin press statement. In fact, the Army has configured the weapon so that two missiles can fly from the same launch-pod container, a circumstance that could increase tactical mobility and the rapid rate of fire.

The Army’s fast-emerging Precision Strike Missile is being developed as a major, long-range, and precise land-attack weapon. But it appears that the military service has bigger plans for it. The Army is clearly evolving the weapon so that it is capable of attacking enemy ships, air defenses and other maritime targets.

The multi-domain concept is consistent with the Army’s cross-domain, networked combat approach, which is now being fast-tracked at events such as the service’s Project Convergence exercise.

Earlier this year, key PrSM developers told the National Interest that the Army is already making plans beyond acquiring a mere land-attack weapon.

“We are thinking past 2023 and thinking about how we’re going to use the Precision Strike Missile to hit ships and air defenses,” Brig. Gen. John Rafferty, the director of the Long Range Precision Fires Cross-Functional Team for Army Futures Command, told the National Interest.

The military service has conducted tests at White Sands Missile Range in New Mexico and Vandenberg Air Force Base in California. “We are continuing to increase the complexity of the challenges of each test event as we go along,” Rafferty said earlier this year.

The most recent missile test at Vandenberg Air Force Base shows that the missile can hit ranges farther than four hundred kilometers, according to a Lockheed Martin press statement. In fact, the Army has configured the weapon so that two missiles can fly from the same launch-pod container, a circumstance that could increase tactical mobility and the rapid rate of fire.

Later this year, the Army plans to fire PrSMs during its Project Convergence 2021, an exercise where cutting-edge innovations will be tested. The exercise prioritizes experiments. Some of them will be aimed at using artificial intelligence-enabled computing to instantly analyze information, share target data or pair sensors with shooters. This concept was demonstrated last fall at the Army’s Project Convergence 2020. In a discussion with the National Interest, Army Futures Command Commander Gen. John Murray explained that the PrSM will figure prominently in networking, sensing and artificial-intelligence-targeting scenarios envisioned for Project Convergence 2021.

Project Convergence is intended to be an “experiment” or “learning exercise” to push the envelope of technological possibility and, ultimately, change the paradigm for modern warfare and the Army’s combined arms maneuver strategy, according to Murray. The objective, which was accomplished in many respects during Project Convergence 2020, was to reduce the sensor-to-shooter targeting decision cycle from twenty minutes down to seconds. Despite the success of Project Convergence, Murray made describes the effort as an “ongoing experiment” and “learning process.”

“In the future, we want to bring in more shooters and kind of expand,” Murray said. “And it’s about scaling, right? So, you know, how, how far can we expand the network? How far can we expand their scale in the number of shooters we bring? And how far can we scale the number of sensors? Because you’re gonna reach an upper boundary at some point. And so what is that upper boundary? And you know, how does that work in a contested environment?”

When coupled with the kind of multi-node sensor-to-shooter pairing described by Murray, the PrSM brings first-of-its-kind multi-domain attack possibilities to dispersed areas like the Pacific region, Rafferty said.

“The long-term missile solution for the Army is to attack all domains including maritime and land is PrSM,” Rafferty said.