The U.S. Army Wants 'Bullets' That Can Chase Moving Targets 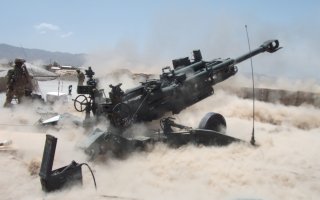 Here's What You Need to Know: Designing these new projectiles won't be easy.

The U.S. Army wants bullets and mortar shells that do more than hit a target. It wants projectiles that can hit a moving tank or even an aircraft in flight.

It's a worthy idea, except there is a problem. Building small projectiles with actuators—the mechanical parts and control surfaces that would adjust the projectile's trajectory—that can survive being shot out of a gun is a challenge.

It's not that guided projectiles don't exist. The problem is that they're only for artillery. About a decade ago came guided shells like the U.S. Army's M982 Excalibur, configured with fins and GPS guidance to adjust its trajectory in flight, reliably land much closer to the target than regular projectiles. But even these shells, shot indirectly from miles away, are really suited to hit stationary targets. Regular artillery shells have an accuracy of landing about 650 feet from the target, according to the army. The M1156 guidance kit, which can be fitted to turn regular shells into smart shells, has an accuracy of 165 feet, while even an Excalibur shell still has an accuracy of sixty-five feet from the target.

But a new army research project aims to create small projectiles—bullets, mortar shells, handheld rockets—that can change their trajectory in mid-flight. "Current gun-launched guided munition technologies are limited to indirect fire against stationary targets on the ground," the army says. But a more maneuverable projectile, better able to adjust its trajectory, could offer numerous benefits, such as "extreme range extension, enhanced maneuver authority which enables intercepting moving ground and air targets, and increased trajectory shaping that could be used to change the mid-course path of the projectile or control the terminal approach angle to maximize lethality."

For example, a bullet that can change its trajectory would be able to climb over a wall and hit the target hiding behind it. A mortar shell could change its path so that it hits the ground at the most lethal angle.

But of course it couldn't be that easy. The problem is building a shell with actuators—the mechanical parts that enable the shell to change its path—strong enough to survive being shot out of a cannon. "The gun launch event imposes severely high structural loadings as the projectile is accelerated from stationary to muzzle velocities exceeding four times the speed of sound," the army notes. Some actuators can survive being launched from artillery pieces that impart a force of 20,000 times the force of gravity. But direct fire weapons can impose bigger stresses: the electromagnetic railguns that the U.S. military is developing, for example, impart a force of 60,000 times gravity.

The army suspects the answer lies in "innovative solutions in electro-mechanical design, power conditioning, feedback sensing, embedded processing, and control algorithms." The first phase of the project calls for thinking of ways to develop ways to control the trajectory of small projectiles, followed by a prototype.